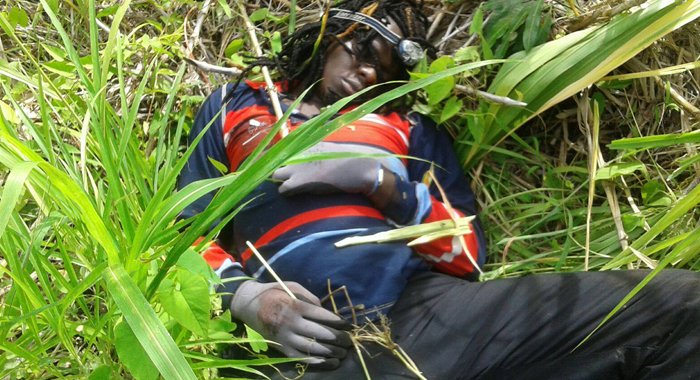 The body of Hugo Young of Victoria Village was found on Corea’s property Saturday morning. He had on his head a light stolen from Corea’s house on May 6 and was wearing gloves.

A Calder Ridge farmer whose house has been repeatedly burglarised shot and killed a bandit and injured another while they attempted to remove a vault from his home Friday night.

Dead is Hugo Young of Victoria Village. Another of his fellow villagers is in hospital nursing a shotgun injury to the leg.

Reports are that the homeowner, who has a licensed shotgun, was in Brighton Friday night when he received information that some of the lights at his house had been broken out.

The man is said to have left with his firearm and parked his vehicle some distance away and walked to his house.

Along the way to his house, he is said to have discovered food, wine and other items stolen from his property packed in bags.

He heard movement and is said to have found the two men dragging his vault down the bank.

The homeowner is said to have opened fire and summoned the police.

The injured man was taken to hospital and an initial search Friday night did not turn up the other bandit.

Reports are that he was shot in the chest.

Young was wearingwhat appears to be rubber gloves.

He had around his head a hands-free headlight that is said to look much like one that was stolen from the homeowner’s property sometime before.

Vaults have been stolen from several businesses in St. Vincent and the Grenadines over the past year or so. Some person have been charged in connection with some of these heists.

In late March, a police officer assigned to guard the home of Deputy Prime Minister Louis Straker in Layou shot and injured one of several men who were said to have been carrying a vault that they had reportedly stolen from a nearby supermarket.

3 replies on “Man shot dead, another injured during burglary”