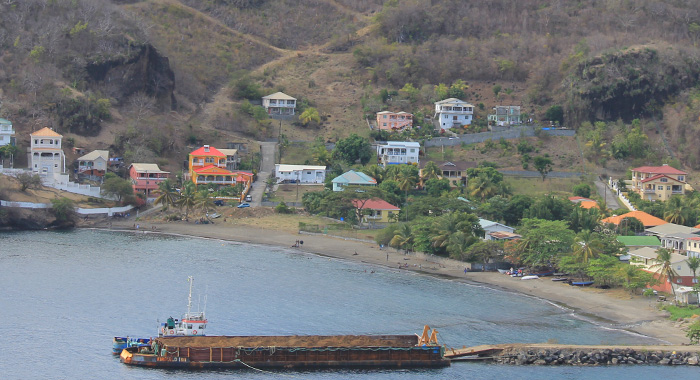 A police officer stationed at Straker’s house, furthest right, open fire on the men, one of whom was later found in a pirogue anchored off jackson Bay. (IWN photo)

The barrage of gunfire that woke residents of Ruthland Vale, Layou early Sunday morning was not an attempt on the life of Deputy Prime Minister Louis Straker, as some residents of the Central Leeward town have rumoured.

Commissioner of Police Michael Charles, however, told iWitness News on Monday that a member of the police security detailed assigned to the senior government official was involved in the shooting.

Charles said that since the December 2015 general elections, Straker has been assigned a police security detail.

The officer on duty at Starker’s house, which is located relatively close to Jackson Bay in Ruthland Vale is said to have seen some men carrying what appeared to be a body.

Charles told iWitness News that the officer identified himself as a police officer and ordered the men to halt.

One of the men is said to have reached into his waist as if to retrieve an object and the police officer opened fire.

The men are said to have fled, leaving behind what turned out to be a vault.

The police officer called for back up and lawmen were later summoned to Jackson Bay, where someone reported hearing cries for help.

Charles said that officers arrested an injured man, who is in hospital.

He is believed to have been shot by the member of Straker’s detail, Charles said, adding that the man is also a suspect in the burglary that same night of Triple S Super market, located also in Layou.

The shooting and subsequent police operation sent the rumour mills in the Central Leeward town grinding, with some residents churning out stories that there was an attempt on the life of the deputy Prime Minister.

They further claimed that the development was related to the on-going saga surrounding the election results in that district, which the opposition is contesting in court.

A resident of the area said they heard three gunshots, a pause, four more gunshots, then a barrage of gunfire.

As the police operation continued after dawn, a group of police officers walked on the beach at Jackson Bay and trained their guns on a man who was aboard a pirogue anchored about 20 feet away from the shoreline and ordered him to come ashore, a resident told iWitness News.

Witnesses said that after some time, someone dressed in what looked like swimming trunks, swam out to the vessel and grabbed the man.

A second person swam out to the pirogue and the man was brought ashore.

Police officers are said to have removed from the vessel what appeared to be three handguns and other items while the man remained kneeling on the beach, surrounded by police officers.

Witnesses said there was what appeared to have been blood on the beach where the man was kneeling while the police processed the scene.