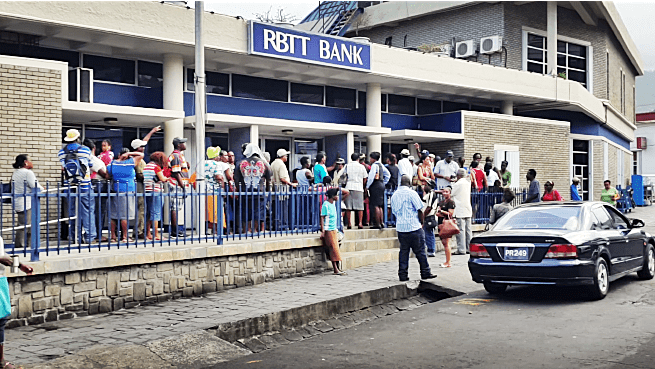 A number of persons say they have withdrawn their savings from RBTT Bank in Kingstown because of an EC$25 monthly charge that will take effect on May 23.

There were long lines inside and outside the bank on Tuesday and Wednesday, the first business days after The News newspaper reported on the new charges last Friday.

A number of reporters who were at the bank on Wednesday were given a telephone number for Nicole Duke-Westfield, RBC Financials senior manager of corporate communications, based in Trinidad.

But the person who answered our call to Duke-Westfield on Wednesday said she was unavailable to take the call, and instructed us to leave a voicemail for her.

Duke-Westfield was yet to respond to our request for a return call at the time of publishing this article.

A printed notice at the bank on Wednesday said, among other things, “Effective May 23rd, 2016, we will be introducing a new suite of personal accounts.”

The notice said that should persons have any questions about the changes or wish to review their current banking requirements, the bank “would be happy to discuss the options that are right for you”.

One woman who had just exited the bank told iWitness News that she had withdrawn “almost all” her savings because of the new fee.

“There was no consultation and I think if you are doing something like that, you should consult your clients,” she said.

“I withdraw all. Almost all. I was just going to leave seven dollars so that they can’t get the 12.50 out,” she told iWitness News, adding that as a senior citizen, her account would attract a monthly fee of EC$12.50 as opposed to the EC$25 imposed on other accounts.

The woman, a retiree, said she has had an account at the bank since in the 1960 “since I started working — a teenager.”

Asked what would she do with the money she had withdrawn, she told iWitness News, “We gotta move it somewhere, but not to CLICO or British American because they are not around. We are still suffering,” she added, saying that she is still suffering from the collapse of those financial institutions.

“I lost almost all I worked for. I worked for 37 years and I lost all that I worked for,” the former telecommunications sector worker said.

Another woman, who is self-employed, said she has been an RBTT Bank customer for more than 20 years.

She told iWitness News she asked the bank’s staff about the new charge.

“They don’t know if it’s gonna be there permanently or just for now. I asked about the charge for you to take out your thing, they said no they are not charging, just charging those that take it out by cheque,” the woman said.

She told iWitness News that she hadn’t decided if she would withdraw her savings.

“I have quite a bit of money and I don’t know where I am going to put it. That’s where I am looking for right now,” she said, adding that she was going “around the corner” to consult with another financial institution and make a decision after.

The self-employed woman said she was mindful not to wait too long, in case there is a run on the bank.

Meanwhile, a businessman who has had an account at the bank for about five years, described the EC$25 charge as “ridiculous”.

“For me, any bank do that is is ridiculous because they are already charging you for every withdrawal you make in a bank. So what’s the $25 for? Once I get charged $25 every month, I will be withdrawing from the bank. Close the account.”

He said he would decide what to do with the money after he withdraws it.

“From what I heard on the street and I came yesterday and I asked questions in the bank, I found out what I heard is true.”

Another woman said she finds the charges “very outrageous”, adding that they would defeat her attempts to save money for her children.

“I have mortgages but I still try to save a little something for my children. I might not be able to make it every month but when I can, I put $100. I have two children. Out of that $100, they are going to be taking $25 — a quarter of what I am trying to save for my children. It is just totally ridiculous.”

She said she is shopping around at other financial institutions.

“But I know for certain that if they don’t pull it back, hopefully by June, I am out of there,” the woman said of RBTT Bank.

She said she has a loan at the bank and that might make it difficult for her to move her account, but added, “…it’s not impossible”.

She said the bank is trying to justify the fee by saying depositors get interest.

“They do not get $300 in interest on a yearly basis,” the woman said of her children’s accounts.

She said she is thinking of moving her accounts to an indigenous bank.