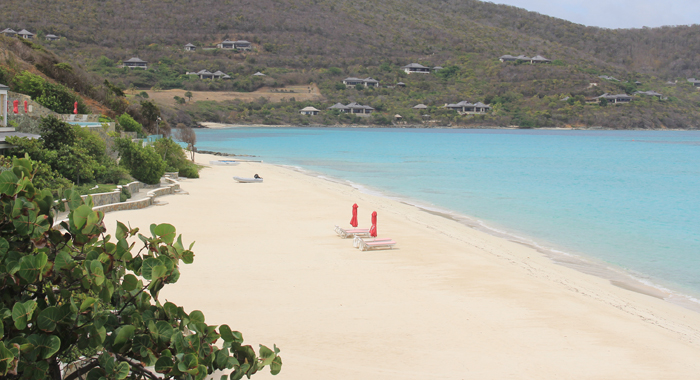 Godhal Beach in Cnaouan, like all beaches in SVG is poblic. The only challenge is getting there. (IWN photo)

A senior government official says that residents of Canouan are not giving up their rights if they compromise on the beach access issue, but a community activist on the southern Grenadine island is maintaining that access by land is “a must”.

All beaches in St. Vincent and the Grenadines are public and residents of Canouan are pushing for access by land to beaches in the north of the island, two-thirds of which were leased to investors almost three decades ago.

Luxury resorts are located in that “developed” area in the north and the “village” is located to the south, where a US$100 million marina is under construction.

The management of the resort say that the only land access to the beaches in the north is through their property.

They say that if they are informed, they would provide a golf cart or bus to transport persons to and from the entrance of the resort to the beach.

During a government-arranged media tour of tourism projects on the island on Friday, Director of Grenadines Affairs, Edwin Snagg told reporters that there cannot be 24-hour unrestricted access to the beaches where the resorts are located.

“There must be a certain level of control and management and I think it is simple as that,” said Snagg, who is originally from the Southern Grenadines, and has failed in all of his five attempts to win that constituency for the ruling Unity Labour Party.

“The investors here have indicated quite clearly that anybody who comes to the gate and wants to have access to go to the beach is brought here by a golf cart.”

He noted that private vehicles are not allowed inside the resort, adding that this rule applies to homeowners within the developed area.

If a group larger than 10 persons wants to go to the beach, they are required to provide early notice “so that they (resort) can make the necessary arrangement,” Snagg said.

“The whole thing is that there is a system and it has to have certain amount of balance and reasonableness on both sides of the turf,” Snagg told reporters.

‘not giving up your rights…’

“I mean, one, you are not giving up your rights because if you compromise because of a particular situation,” he said, noting the number of persons that the resort employs and “the overall spill off and the benefit to the country as a whole.

“One can say that you can still come by boat and I wouldn’t say that because that is not an issue,” he said, noting that anyone can access the beach by boat.

“You can always come by boat, because nobody can stop you from coming to any beach, go to any beach in St. Vincent and the Grenadines, but public access is where the issue is. It is a complicated issue, but things do happen and arrangements are always made. And why can’t we make an arrangement where you can come to the beach by coming to the gate?”

Snagg noted that some persons have said that they don’t want the investors to feel that they are doing beachgoers a favour by transporting them by golfcart to the beach.

“It’s not a favour, it is your right to go to the beach. All beaches in St. Vincent and the Grenadines are public, but here you have a resort, a five-star resort and you have a certain type of clientele and one has to understand, one, your security issue, which is always a critical element.”

He said while he is not belittling his people, there are people who would ride into the resort in the middle of the night on a motorbike that doesn’t have a muffler.

“Or we have some villas here where I see copper guttering. Ah mean, you ha’ to be so mindful and careful, particularly with the tourism product as it is right now.”

Snagg said he believes that in the initial stages of the project, which began in the 90s under the James Mitchell New Democratic Party administration, the people of Canouan did not have an understanding of the project.

“I think that the PR work that was done then, I mean, probably was not its best. And the project emerged and as it is emerging, you are seeing some of the difficulties that are coming up. In fact, I will call them challenges, because they are not insurmountable. And certainly they can be sorted out by understanding and there must be a certain amount of reasonableness and balance on both sides of the turf.”

Asked to comment on the view that an access road can be built outside the resort, Snagg said:

“You see the thing about it, and that is why you were brought here so you can see the configuration.

“Where is the possibility of an access road to get to this place?” he said of the area where 1,200 acres of lands have been leased to developers.

He said there was under utilisation of the beaches before the tourism development.

But Canouan resident and community activist, Terry Bynoe, is maintaining that land access to the beaches “is a must”.

“We cannot continue to go down this road and just look at the investment dollar without looking for your people’s interest as well. Investment must be for the people first,” he told reporters separately on Friday in Canouan.

He said persons who want to accept the resort’s offer of transportation via golf cart or bus are free to do so.

“Nothing is wrong with going on the golf cart but what happens if they decide they are not doing it tomorrow? It is a favour. They don’t have to do it. But there must be an access where a man and his wife can walk to the beach if they choose to,” he said, adding that the resort management would not just dedicate a golf cart there or driver for a bus everyday for if locals want to go to the beach.

“It’s a cost and you can chose to stop it at anytime,” said Bynoe said, who asked what would happen if the resort changes management.

For Bynoe, public access is “if there is an area the government can acquire for an 8- or 10-foot road or if there is a boardwalk from Twin Bay onto Godahl if you don’t want us to drive through the resort.

“There must be a public access where people can use,” Bynoe noted.

Told by one journalist that the resort owners are not stopping residents of the island from visiting the beaches, Bynoe said, “That’s what they say.

“What about me who has an injunction?” said Bynoe against whom the resort secured an injunction 16 years ago preventing him from coming onto their property.

“What if they take out one on you tomorrow if you choose to advocate the same things that I do? The thing is, public access is a must and it must be put in place that persons, if they don’t want to ride on your golf cart, if I have my uncle on a wheelchair or my wife, I must be able to push her to the beach.

“Nothing is wrong with who want to go on the golf cart. But there must be a public access that does not deny the people at any moment.

“Access must be put and the fight will continue until it’s done,” Bynoe said.