‘If I can kill a thousand, I’ll kill them,’ says homeowner who shot and killed burglar 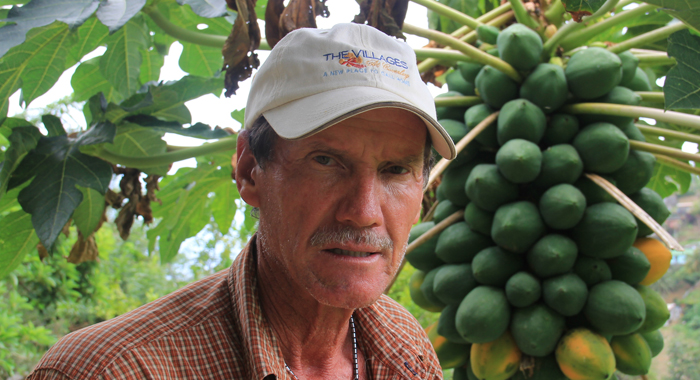 Farmer Delonore Tozie Corea shot and killed one man and injured another while they were reportedly removing a safe from his property Friday night. (IWN photo)

The homeowner who shot and killed an intruder on his property last Friday night and injured another said he is no criminal but has no hard feelings about what he did.

“I am not a criminal; I never planned to kill anyone. But in cases like these, and you come on my property to do what you do, and if I can kill a thousand, I’ll kill them — once you come to destroy my property,” the homeowner, 58-year-old Delonore “Tozie” Corea told iWitness News on Sunday.

Corea is the holder of a licensed shotgun but has been the victim of several burglaries at his house, which is located on his five-acre farm in Carapan.

“I was leaving my home and as soon as dark start stepping in, I started to panic a bit, because it’s coming night,” he said, adding that if he had to leave the property, he would have to hurry back because as soon as it was 8 p.m. his house would become a target.

Police said Tuesday they are investigating the shooting death of 27-year-old Hugo Young of Calder Ridge, whose body was discovered on Corea’s property on Saturday morning with what appears to be gunshot wounds.

Hours earlier, Kelroy Richards, 27, of Victoria Village, was found by police on a section of Corea’s property with gunshot wounds to the lower part of his body. He was taken to the Milton Cato Memorial Hospital, police said.

Corea told iWitness News that someone came into his house on May 6, when he was not at home.

He said he concluded that it was a single intruder because they took a 180-pound safe that a strong person can lift.

However, there were signed that the burglar(s) had also attempted to move a 600-pound safe in the house, Corea said.

He said that he had not been in the habit of locking his house so the intruder just removed the padlock from the burglar bar at the door and entered.

Corea told iWitness News that after that intrusion he began to lock up his house and carry with him his shotgun, which he had been in the habit of leaving in the safe.

He said that on Friday, he put in three bright bulbs outside the house and “put in these five special shots in my gun.

He was at Huffles Ranch in Brighton getting some lottery tickets when someone who lives close by called and told him his house looks “very pretty” — meaning well-lit, Corea told iWitness News.

He said he told the neighbour that he had put in new bulbs to light up the outside of the house.

About 15 minutes later, another neighbour called Corea asking if he was at home, telling him that the lights outside his house had gone out.

Corea said he told the neighbour to go to a certain part of the property and observe the house to see if anything unusual was taking place.

He said the neighbour called back saying that there was a lot of hammering inside the house.

Corea said he left Huffles and called the Stubbs Police Station, telling them who he was and that he understands that intruders were in his house and he was on his way there.

Corea said that he parked his truck about 700 feet from his house and walked him.

When he got to the south side of his house, the lights inside were on and he could see the 600-pound vault, which was chained to burglar bars, was missing.

“I got a bit worried. So, as I made the first step, forward, I heard ‘bup’ (a thud), so I realised that was the vault fell from them,” Corea said, adding that he also heard whispering.

“So I looked in the direction of where they were. And when I put on the light, I saw both guys. And I say ‘Aye!’ and I see the guy put his hand up. I don’t know if is a gun or what, and I start fire ‘pon him immediately,” Corea told iWitness News.

“I knew within myself that those guys would have to be dead. It is hard for I to miss that size object. I do real (a lot of) shooting. I go and shoot manicou (opossum). A manicou is 8-9 inches in length, 3-4 inches in diameter and I don’t miss them. So how could I miss this size object? And I didn’t see if they run or what. So I did not go to the site. I called the neighbour to come and stay here for me.”

Corea said he did not hear anyone cry out after the fired upon the persons.

He said the injured man said he couldn’t move because his foot was dead.

“I said, ‘I don’t even want to see you because you shouldn’t be here now,” Corea told iWitness News.

The police ask him if he was alone and he said, ‘Dollars gone for help to help me.’ He was not saying that this guy, Hugo, was with him. He was just saying ‘Dollars gone to look for help’,” Corea further said.

The property owner told iWitness News that when they got back to the area where the vault was, he told a neighbour that it seemed as if someone had gone down through some bushes nearby.

The police took the injured man to the hospital and the vault to the police station.

Corea said that in addition to the safe, canned and other food items, along with bottles of wine and two bottles of honey that he had been keeping for two years for observation, were stolen Friday night.

He told iWitness News that he did not sleep at his house Friday night.

“I was really worried about him (the other intruder) not being dead. I knew he had to be, but I was still telling myself, ‘I wonder if he was still alive. At the time I didn’t know who the guy was. Not knowing who the guy was, I believe if he had lived he would have looked to retaliate,” Corea said.

He said he went back to his house about 8:50 a.m. Saturday and, armed with his shotgun, went to the area where he saw as if someone had passed through some bushes.

When he got a little further, he said he saw a man lying under a mango tree. He said he nudged the man, and his body was stiff, suggesting that he was dead.

“When I looked, I saw my light on his head. I said, ‘Oh, you are the guy; you are the first guy that came in and took the first vault.’

“He had the light and he had on two gloves,” Corea said, adding that the light that Young had on his head had been stolen from off a table in his house on May 6.

Corea said he has had his firearm for about 10 years and never had reason to discharge it at anyone.

He, however, said that it is widely known in his neighbourhood that he has a firearm.

“Every now and then, my dogs keep a lot of noise and thing. I come out and I blast a few shot in the air.”

Corea said he didn’t know that the men had an axe, but knew that the police had found a cutlass near the vault. They found and axe near to where the vault was,” he said, adding that it is believed that the axe was used to break the chain with which he had secured the safe to his property.

There have been several burglaries in St. Vincent and the Grenadines in which safes have been stolen.

Asked if the safe, which was custom-made, was designed to be bolted onto a wall, Corea said yes.

Corea said he knows Young’s mother, but did not know Young.

While on the way to his way house on Sunday, Corea happened upon Young’s mother and his sister.

Young’s mother told him that her son was wrong and that they don’t have any hard feelings against him because of what happened.

7 replies on “‘If I can kill a thousand, I’ll kill them,’ says homeowner who shot and killed burglar”