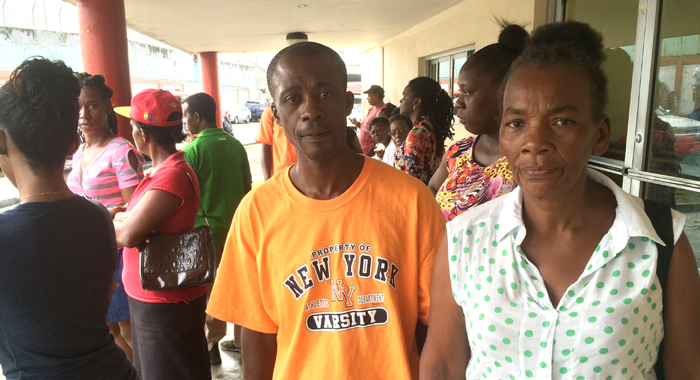 Bernise Bowens, common-law wife of injured man, Picton Pierre, along with his brother and other relatives outside MCMH on Thursday morning. (IWN photo)

A Campden Park man was up to Thursday morning warded at the Intensive Care Unit of the Milton Cato Memorial Hospital (MCMH) in Kingstown, after he was injured at the Glossy Bay Marina construction site on Saturday.

Reports are that material behind a temporary retaining wall fell on Pierre after its support structure was removed.

Other workers are said to have gotten out of the way in time, but Pierre was not so fortunate.

Bowens told iWitness News that doctors have said that Pierre’s spine is broken.

“And, to my mind, he is not moving. He is there lying down on the bed. He ain’t moving or nothing,” she told iWitness News shortly after exiting the MCMH Thursday morning.

An official at Gloss Bay Marina said they will later on Thursday return a call to iWitness News to answer questions about the incident.

Private investors are building a US$100 million marina near the airport in Canouan.

The first phase — 125-berths for luxury yachts — is expected to be ready to receive vessels by December 2016.

Much of the site was still solid ground when a delegation of state and private media visited last week Friday during a government-organised trip.

Officials at the marina say that 350 workers, mostly Vincentians, are working 24-hours a day to meet the December 2016 target.

UPDATE: After publishing this story, we received the following statement from Glossy Bay Marina Construction:

We regret to report that, on Saturday 14th May 2016 at around 10:40am an accident occurred at the Glossy Bay Marina construction site.

An employee of Glasgow Construction, Mr. Picton Pierre was injured when a steel reinforcing cage he was working on collapsed on top of him causing a serious head injury, despite the fact that Mr. Pierre was wearing a safety helmet at the time.

Mr. Pierre was rushed to the Canouan Medical Centre where he received treatment but was then airlifted to St Vincent in a plane chartered by the main contractor, Glossy Bay Construction, and admitted to the Milton Cato Memorial Hospital for further treatment.

The Police were informed of the incident and a report was compiled by the GBC Security officers who attended the scene of the accident.

We will advise of further developments regarding Mr. Pierre’s condition as we receive them.