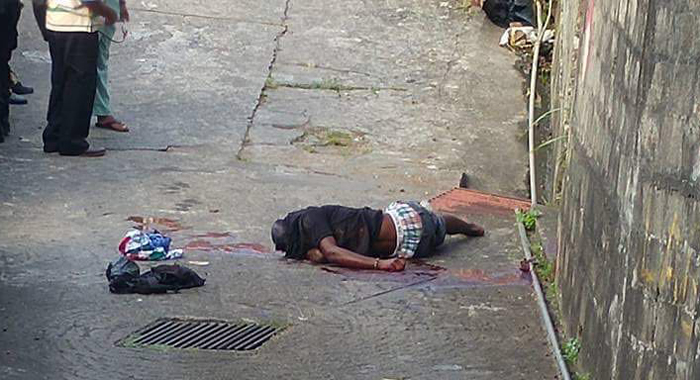 Police were on Wednesday morning working to determine the identity of a man whose body was found in the public road in the Upper New Montrose area, the 14th homicide this year.

Reports are that the man was wearing a mask and is believed to have been the target of gunshots that rang out in the West Kingstown community late Tuesday night.

The death brings to three the number of persons killed in St. Vincent and the Grenadines over the last week, all of whom fell to gunshots.

Homicide detectives have been kept busy trying to solve a number of killings over the last few weeks.

He is said to have died sometime after being removed from the scene, after lying in the public road for some time after the shooting.

Prime Minister Ralph Gonsalves said on radio on Tuesday that the latest spate of killings are a result of a drug deal gone awry, persons “settling old scores”, and turf wars among rivals.

Gonsalves, who is also Minister of National Security, said he has met with senior national security officials to discuss the crime situation in the country.

Speaking on Boom FM, Gonsalves said he, along with Commissioner of Police Michael Charles and Permanent Secretary in the Ministry of National Security, Godfred Pompey have taken “certain decisions … to consolidate some thing which we are doing and to do some other things.

“You will see over the next few days certain things made manifest. But I want everybody to know I take the issue of citizen security very seriously. And not only in relation to working with the Commissioner [of Police] here but working with our friends regionally and internationally, because we are living in a dangerous neighbourhood.”

Gonsalves said there are occasional spurts of violent crimes in the country.

“You may have a drug deal gone awry, somebody may steal somebody else drugs, so you have persons who are engaged in certain kinds of activities who get involved and some killing which appear opportunities,” he said.

He added that there are some absence of restraint killing, such as the stabbing death of 25-year-old Police Constable Giovanni Charles, who was killed on May 2, allegedly by someone who didn’t want to pay the EC$2 entrance fee at a primary school fair.

Gonsalves said he could not go into details of any particular case because they are either under investigation or before the court.

“But I want to give the assurance. And St. Vincent and the Grenadines, we remain a very safe and secure place, but, of course, we have people who are seeking to disturb that tranquillity and that calm and that peace.”

Gonsalves said some of the killings are related to a drug deals gone bad and in some cases, persons are “settling old scores” relating to drugs.

“And some of them evolve among young men into vanity issues. ‘I control this block. You did this to me, or you did one of me soldiers this’,” Gonsalves said.
He said it is not that there are “gangs solidified, because the boundaries are fluid,” adding that within a kind of criminal culture/sub-culture, “you get manifestation like these”.

Gonsalves said he is not happy with the response of the police in all cases because the response has been “of uneven quality”.

He said some cases have fallen down in the courts for technical reasons because the police did sloppy work, and, sometime, from a prevention standpoint, the response is slow.

The prime minister said there needs to be among all ranks of the police force sensitivity in relation to intelligence matters touching and concerning citizen security.

“To be on your alert,” he said, adding that a beat police officer should not only be on the alert for person engaging in illegal activities, but to observe and pick up bits of information and relay them to the appropriate channels” and not only leave intelligence gathering to the Criminal Investigation Department or the Rapid Response Unit of the Police Force.

“You have to fight crime, among other things, very much so, with intelligence, with information. That is where you have to be able to prevent certain things happening, to apprehend persons which do things which are serious breaches of the law.”

Gonsalves, however, disagreed, that the upsurge in crime is as a result of unemployment, especially among youths.

“And there are persons who are encouraged and they encourage themselves into getting engaged in these matters,” Gonsalves said.

6 replies on “St. Vincent records third killing in a week”