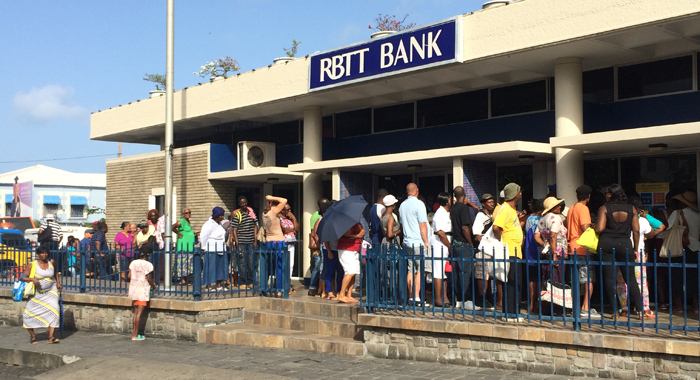 Long lines formed outside RBTT after the News newspaper reported on May 13, 2016 that depositors would be charged EC$25 a month to keep their savings at the banks. A number of reporters who were at the bank on May 18, was given a telephone number for Nicole Duke-Westfield, RBC Financials senior manager of corporate communications, based in Trinidad. But the person who answered our call to Duke-Westfield said she was unavailable to take the call, and instructed us to leave a voicemail message for her. (IWN photo)

Holders of accounts at RBTT Bank in St. Vincent are being advised to seek advice and make their own decision about closing their accounts in light of an EC$25 monthly service fee the bank introduced on Monday.

“I would tell persons to make their own judgment,” Prime Minister and Minister of Finance, Ralph Gonsalves said on Boom FM on Tuesday, one day after Opposition Leader Arnhim Eustace told listeners to his weekly programme on NICE Radio to seek advice before making a decision.

Gonsalves said the fees “just came out of nowhere and they are excessive” and said if a depositor has a sufficiency of money and feel they can bear the EC$300 annual fee, they can choose to do so.

“If not, move it and put it somewhere else. The only thing is this: I believe that RBTT is not mourning the loss of a number of small accounts you know. Because it is expensive for them to maintain small accounts,” Gonsalves said.

He said he had been waiting for the Eastern Caribbean Central Bank to make a statement on the matter — which they did on Monday.

The ECCB said it was concerned about the fees that some commercial banks across the currency union has levelled on accounts, but noted that it does not have the legislative authority to regulate these fees.

Gonsalves said he has repeatedly raised the issue of these charges at meetings of the Monetary Council of the Eastern Caribbean Currency Union.

He said he has also raised the issue with the previous and current governor of the ECCB.

“They, of course, quite properly respond by saying they have no legislative control, neither do we, over a bank imposing certain fees and charges.

“Those are matters which the market determines, though of course, the Central Bank, upon a decision by the monetary council, would determine minimum deposit rates,” Gonsalves said.

He said there are persons who look at what RBTT has done and raise legitimate questions that the matter should have been discussed in advance or they should have given proper notice.

Gonsalves noted that a small depositor who has $1,000 in an account at the beginning of the year and does not make any further deposits would have $700 at the end of the year.

“People, naturally, would protest, and I think they reach a tipping point,” he said.

Gonsalves said he was worried about Bank of St. Vincent and the Grenadines — in which the government owns significant shares.

He said that some of the persons who have closed accounts at RBTT would move to BoSVG, or go to the credit unions, adding that credit unions’ bank with BoSVG.

“Some people say — quite cynically — RBTT decided to do it and hoping that people would withdraw their money — the small ones,” Gonsalves said.

Asked if he was concerned about the run on the bank, Gonsalves said:

“It is not a run as a consequence of the banking system being flawed or RBTT is insolvent or there is a threat if insolvency. That is not the case. These are people who are moving their money because ‘I have a small account, and even if I don’t have a small account, I moving my money as a matter of principle, from you because you put this charge. You didn’t tell me anything’ and they will go to another bank,” the Prime Minister said.

On Monday, Eustace urged the public to consider whether RBTT has introduced the fees because it has a lot of cash but few persons who are coming to borrow, and therefore the charges were intended to substantiate their income.

He described as “old talk, foolishness”, calls to protest the bank because of the fees.

Eustace called on depositors to go the bank and ensure that they understand the process and see if the fees apply to their account before deciding to close it.

He noted that persons who had joint accounts can no longer send a card overseas for the signatories to sign, but have to come to the bank in person to do so.

“I am not saying that you must not remove your money if you are uncomfortable, but recognise that in doing so there are implications and make sure that you have the minimum implications that will come to you. All I am saying, take more care with the exercise and ensure that you are not doing more harm to yourself and your finances than you are doing good.”

He, an economist, said he believes that some of the economists and accountants in SVG should do the public a service by explaining what a lot of the development in the banking sector mean.

“I am a politician so people would say, ‘He doing that for politics.’ But, people are faced with the problem today. Not next year. They are faced with it now. While I am speaking now, there are people in the bank down there who are making those decisions every minute. I am saying, take heed,” Eustace said.