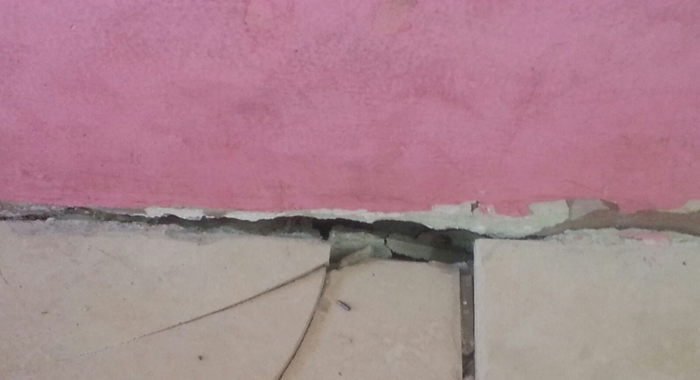 Large cracks have appeared in the Canouan Government School.

The St. Vincent and the Grenadines Teachers’ Union (SVGTU) on Friday urged the government to abandon the Canaoun Government School, in which large cracks have appeared over the past few week.

“The St. Vincent and the Grenadines Teachers’ Union strongly urges the Ministry of Education to act expeditiously and make alternative arrangements to house the students and teachers of the Canouan Government School,” the union said in a release on Friday, its second statement on the situation this week.

“The Union is extremely concerned about the safety of students and staff and, equally about teaching and learning instructional time,” the union said in a statement, two days after it said the building is “structurally unsafe

“The Union, therefore, urges the Ministry of Education to use its best endeavours to seek the use of community buildings, churches and or community centres to relocate in order to mitigate the current crisis,” the union said.

“The Ministry of Education also has the option to explore the possibility of erecting temporary facilities, including toilet and other facilities, in the school yard, once the imminent danger of existing building is brought under control.”

The Union further said it is “disappointed and concerned” that the principal of the school still continues to occupy the school building which has been deemed unsafe.

“The Union is, therefore, in the interest of utmost safety, urging the Ministry of Education to instruct the Principal to evacuate the building immediately and stay clear of the danger.”

The union said that teachers and the SVGTU “are ready and willing to cooperate to give full instructional time to students but await the Ministry of Education’s swift response on the suggested alternative arrangements”.

On Wednesday, the union said it had advised teachers a the school to report for duty but to keep away from the building because it has been declared structurally unsafe, and as a result, it jeopardizes the safety of the occupants.

The union sent a team, including its president, Oswald Robinson and an engineer, to examine the school and concluded that it was structurally unsafe.

The union’s conclusions conflicted with those of the government, whose team said last week that, ““Under regular use/attrition, there are no major signs of failure which indicate that the School is in immediate threat of collapse”.