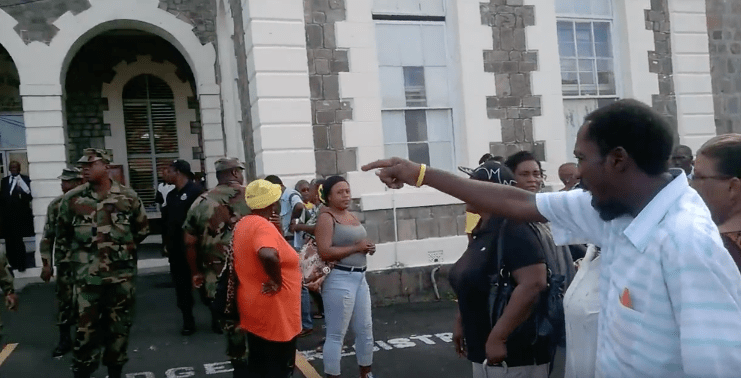 NDP supporters were angered by the Friday’s adjournment.

Hearing of the two petitions contesting the results of the December 2015 general elections in St. Vincent and the Grenadines has been postponed to June 16.

High Court judge, Justice Brian Cottle said on Friday that the adjournment was necessary because the government printer had failed to publish the notice, as required by law.

Stanley “Stalky” John, QC, lawyer for the main opposition New Democratic Party (NDP), which filed the petition, told reporters outside the High Court that the rules require that the trial date be published before a matter is heard.

He said the judge said that after the May 12 sitting in which Friday was set as the trial date, the Government Printing Officer was instructed to publish the date, pursuant to the rules.

However, this was not done.

The NDP is challenging the results of the election in Central Leeward and North Windward in the general elections, which electoral officials say the Unity Labour Party won by one seat, a repeat of the 2010 election results.

Friday’s development is the latest in a number of legal twists and maneuverers in the case.

The government is contending that the petitions were improperly filed and should be dismissed.

The NDP, however, has dismissed this as a technicality that does not affect their case in any material way, even as it says it has compelling evidence that the elections were flawed.

John said that his legal team continues to prepare.

“We are doing our jobs as lawyers and we have put the case before the court and it is a matter for the court,” he told reporters.

Supporters of the NDP who had gathered outside the court responded angrily to news of the adjournment, saying the government orchestrated it.

Speaking separately outside the courthouse, NDP president and Leader of the Opposition, Arnhim Eustace described the non-publication of the notice as a delay tactic on the part of the Ralph Gonsalves administration.

“They are afraid to have the evidence that we have for the petitions aired in court. And therefore, every deliberate effort is being made to try and block the hearing of the petitions,” Eustace said.

He, however, said that patience is running out.

“People are getting more and more angry about what is happening… And this is a very serious situation that is developing in St. Vincent and the Grenadines. People are of the view that the process is being deliberately held back and something has to be done about this,” Eustace said.