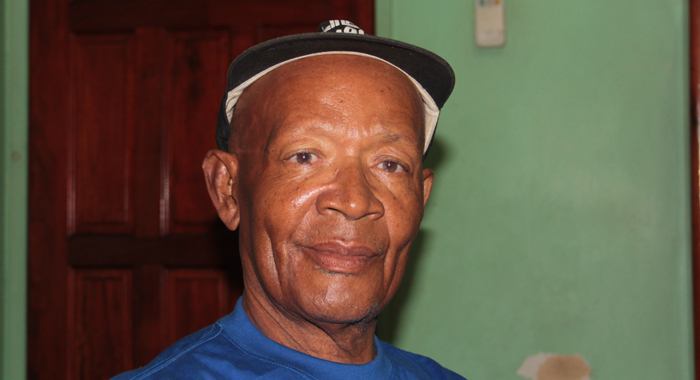 Retiree Hudson Texeira, 73, has been waiting since 2010 for payment for a property the government acquired from him. (IWN photo)

Hudson Texeira came back to St. Vincent and the Grenadines eight years ago, after more than 40 years in England, where he had gone when he was 17.

He had worked as a nurse in England and bought a property in his hometown, Georgetown, in 1982, on which he had planned to build his retirement home.

The two-story building stood on 9,187 square feet of land and once had a business on the ground floor.

But now, at age 73, the man who now walks unsteadily with the help of a cane, finds himself in a battle with the government of St. Vincent and the Grenadines for payment for his lands, which they acquired in 2010, and now stand vacant next to the Georgetown Police Station.

“This was since December 2010 they published it in the gazette,” Kay Bacchus-Browne, the fourth lawyer who has acted on Texeira’s behalf in the matter, told reporters this past week.

Bacchus-Browne came into the matter in 2014.

Texeira is maintaining that he and the government agreed that he would be paid EC$250,000 for the land — EC$19,000 less than what a private evaluator said it was worth.

The retiree said that he and his first lawyer, Carl Glasgow and then Chief Surveyor, Adolphus Ollivierre had agreed to the EC$250,000 settlement.

But, Glasgow is deceased, Ollivierre is retired, and his successor said the government has no records that Texeira negotiated with the government a price for the lands.

“That is where we are at limbo because he refuses to accept that sum because he says his property was worth much more than that when they took it over. We have a valuation for $269,000 in 2011,” Bacchus-Browne said, adding that that evaluation was done by Franklyn Evans, a private evaluator.

She said that having come into the matter, she wrote Governor General Sir Frederick Ballantyne on 9 Feb. 2015, asking him to appoint an evaluation board, in keeping with the law.

When no response came, Bacchus-Browne again wrote the head of state on the matter in August 2015.

She was able to reach him by telephone on March 18 and the Governor General said that he should have responded to the letter and promised to get back to her, Bacchus-Browne said.
She said he wrote her on March 22 saying that he has forwarded her letter to the Attorney General.

In the meantime, Texeira is still waiting to be paid.

“So he thought he would bring this matter to the press,” Bacchus-Browne said.

“The man is seventy-something years old, has not had a cent from his land, they would not appoint the board so that we can have the dispute settled that is forcing him to accept the figure that they are willing to pay him. Hopefully, this will force the Governor General to do what he is supposed to do,” Bacchus-Browne said.

Texeira said he is “very disappointed” that the matter has not been dealt with and feels “anger and vexation”.

“I am very perturbed that I can be treated in such a way, in a disrespectful manner and … I am angry, annoyed.

“Why should I be treated in the manner in which I am being treated? It is my property I worked hard in damn cold England and I came back here to retire and settle down until I die and for them to treat me the way they are treating me, it is disgusting.”

Texeira said that the government had sent a woman to tell him that they were interested in purchasing the land.

There was a property on the land, but the state was not interested in the property, Texeira said.

He said that during the negotiation, he was told that he could take from the property anything that he wanted.

Texeira said that in light of this, he agreed to accept the EC$250,000 that he said was negotiated with the then Chief Surveyor, Adolphus Ollivierre.

Texeira said he had never sold a property in SVG before and didn’t know how it was done.

In England, two lawyers would negotiate, he said.

“But here, it is diabolical how they treat you with your property…”

He said that after the negotiations, Ollivierre had told him to send his account number and whenever the money is approved, he would call him to sign and the money would go to his account.

“I accept him in good grace because I thought it was genuine and I never queried it. So I left it at him. Weeks gone, months gone, I couldn’t hear anything. That’s why I went to these different lawyers…

“This is indecent how I have been treated. How can I be treated like that? This is wicked beyond words,” Texeira said.

“My property was to be my retirement home,” he said, adding that during the negotiations he also spoke with Prime Minister Ralph Gonsalves.

“I went to see the Prime Minister; he talked to me so nicely… He told me whatever was the market value I would be paid for it. I told him that is my retirement property,” Texeira said, adding that Gonsalves said told him Ollivierre would assist him in locating another property.

“I even went to see Mr. Ollivierre and he promised me some land. The land never materialised.”

Texeira said he lives at Georgetown in the home of his deceased mother.

“But I am very unhappy living there. I have a younger brother living with me and it is not my property. And my mother is now dead. I had already worked for my own property. I should have been living in my own property, rent it out — I had everything I was going to do with my property,” he said.