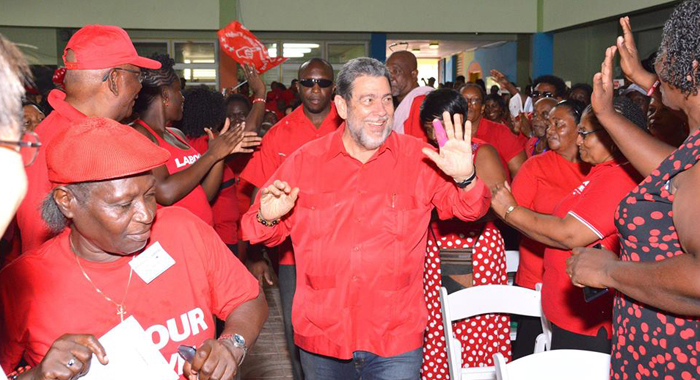 Prime Minister Ralph Gonsalves has put the nation on alert, saying that they may hear one day on the news that he has dissolved Parliament and called fresh elections.

Gonsalves’ Unity Labour Party (ULP) was re-elected to a fourth consecutive term in office last December in elections that observers say were free and fair but which the opposition said the party stole.

He told the ULP’s 22nd national convention on Sunday that neither he nor any election official was involved in electoral fraud in the Dec. 9, 2015 vote.

Electoral officials say that the ULP won eight of the 15 seats while the remaining seven went to the opposition New Democratic Party (NDP), which has filed election petitions contesting the announced results.

“I never get involved in any fraud with any election, no body in the ULP, nobody at all. The election observers said the elections were free and fair and reflect the will of the people,” Gonsalves said.

He told the convention that the ULP should have won 11 seats, adding that the party needed to be better-organised and resourced in South Leeward, North Leeward, and East Kingstown.

Gonsalves told the convention that he wanted to call fresh elections on Feb. 15, but declined to do so after some members of the leadership of the ULP opposed the idea, saying that maybe the people were tired after the last campaign.

“But I felt confident that we could have roused the people for another effort and I intended to camp in East Kingstown, South Leeward and North Leeward because they can’t take any of the eight which we have from us.

“But if you are a commander-in-chief and you can’t get the agreement of every one of your important commanders, everybody has to be on board one hundred per cent.

“The point I am making, this is one man who doesn’t ‘fraid elections,” he said.

“And any day, you can turn on the radio and you hear that I have secured the dissolution of Parliament by the Governor General. So, they want elections? Ah might gi dem wha’ dey want,” Gonsalves told the convention.

Gonsalves said he wants the NDP to appreciate and realise this.

“If anybody is under any illusion that I am interested in two by-elections, they’re out of their mind,” he said.

His comments were in reference to the petitions that the NDP has filed challenging the results in Central Leeward and North Windward.

Gonsalves, however, suggested that by-election would not be necessary, noting that High Court judge Justice Brian Cottle said in a ruling in April related to the case that the government application to strike out the petitions, when made in open court, is bound to succeed.

“Because they haven’t filed them properly, the judge has already said that an application to strike out is bound to succeed,” Gonsalves said.

He described as “foolishness” the statement by Leader of the Opposition and President of the NDP, Arnhim Eustace that he (Gonsalves) doesn’t want the petitions to be heard.

“And if [St. Clair] Leacock ain’t man enough to challenge him, and [Godwin] Friday, too, fraidie, fraidie, that is their business,” Gonsalves said of the two NDP vice-presidents.