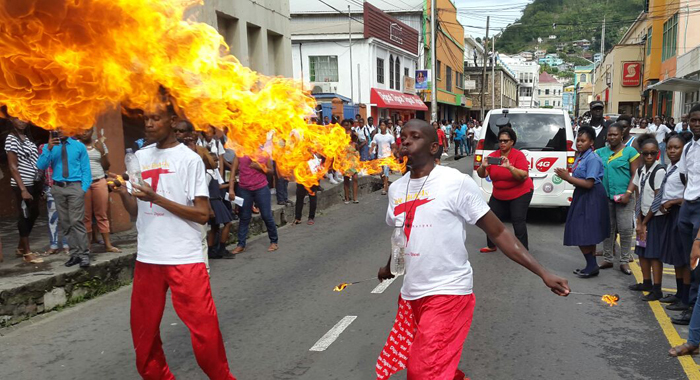 The band is dubbed “Temperature”.

The launch of Temperature, Digicel’s inaugural T-shirt band, featured a motorcade around Kingstown from and climaxed at Heritage Square with a concert.

Friday’s launch saw hundreds of Vincentians flooding onto the sidewalks of the capital trying to get a glimpse of Digicel’s 2016 Carnival production and to also witness the spectacular display put on by the St. Lucian male and female fire-eaters.

In addition to offering a number of sponsored giveaways, Digicel gave person an opportunity to enter into Digicel’s cash vault for a chance to grab as many coupons as they can in 15 seconds.

Digicel’s Head of Mobile Operations, Dionne Emtage said Friday’s event surpassed all expectations and served simply as a prelude of what is in store for Vincy Mas 2016.

Emtage said Digicel will ensure to offer revelers an experience like no other on the road come July 4.