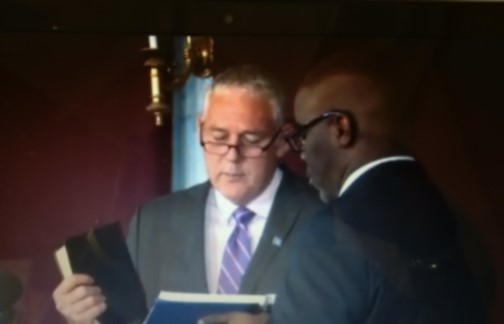 Allen Michael Chastanet was sworn in Tuesday as the sixth Prime Minister of St Lucia since the island attained political independence from Britain in 1979.

Chastanet, an economist, led his United Workers Party (UWP) to a resounding victory in Monday’s general election and immediately signalled his intention to turn around an ailing economy, deal with a ballooning debt while at the same time keeping citizens at the heart of the new socio-economic plans for St. Lucia.

Gonsalves told journalists in Kingstown on Tuesday that he called Chastanet earlier that day to commend him on his “tremendous victory”.

“His party was 11-6 down before the parliament was dissolved and is now 11-6 up. That’s quite a turn around.”

“Anthony, of course, has served St. Lucia well but people make their decisions and you respect the decisions of the people,” he said of the St. Lucia Labour Party leader, who has signalled his intention to relinquish that position.

“Everyone knows that Kenny Anthony has been my friend and he remains my friend and every prime minister and president in the Caribbean is my friend. And this morning, as you would expect, I began the early days of what I hope would be a very warm friendship with Allan Chastanet, the prime minister-elect.”

Gonsalves said he and Chastanet had a good discussion on a number of matters.

“And when he is settled in, I invite him to come to St. Vincent and the Grenadines, which he said he would come, for a couple days for us to talk about several things.

“We talked briefly about the work we have to do with relation to the OECS and CARICOM and LIAT. He is a man of much accomplishment. He has come from a family which is self-made and I am quite sure that he would do well for the people of St. Lucia and he would work very well with his colleagues in CARICOM. And I believe that the relations between St. Lucia and St. Vincent and the Grenadines would be further strengthened,” Gonsalves said.

He said he knows that people would be saying that the UWP and the opposition New Democratic Party in SVG have traditionally had fraternal links.

Gonsalves said that while the party of Prime Minister Keith Mitchell in Grenada had traditionally close links with the NDP in SVG, he and Mitchell are good friends and get along quite well.

“I believe that Allan Chastanet and the UWP benefitted greatly from having persons who normally work for the Unity Labour Party, like Peter Wickham, the pollster and Hartley Henry, the political consultants, who hitherto, in previous elections had worked with the St. Lucia Labour Party, Kenny Anthony.”

The Gonsalves government paid Henry — who, like Wickham, is Barbadian –handsomely for communications work done on behalf of his administration in the years after it came to office in 2001.

Gonsalves said he did not participate in anyway in the elections in St. Lucia.

“And I have no matter on which I have to express any regret as to anything I said over the last days of the campaign.”

Chastanet comes to office almost five years after a leaked U.S. diplomatic cable sent to Washington from the U.S. embassy in Barbados, said Gonsalves in 2008 described Chastanet, then St. Lucia’s Minister of Tourism, as being among “a species of brown people in the Caribbean with money [who are] not loyal to anybody”.

According to the cable, Gonsalves told then U.S. Ambassador to the eastern Caribbean, Mary Ourisman, that these “Castries mulattos” believe they are “oracles”.

Shortly after Wikileaks made the cable public, Gonsalves said the U.S. diplomat distorted his statement.

“I’m a social scientist. I would have given her a highly sophisticated analysis. She is a lady from the deep south of the United States who would want to reduce it to one line. That’s not my problem,” he said in June 2011.

Speaking on Tuesday, Gonsalves contrasted Chastanet’s victory to political realities in St. Vincent and the Grenadines.

He said it is interesting that Chastanet is the first leader of the UWP who has ever won an election in St. Lucia who is not John Compton, the founder of the party.

“… in St. Vincent and the Grenadines, the New Democratic Party has never won an election under the leadership of anyone but the founder, Sir James Mitchell. Other people may take lessons from that and act accordingly. It is not for me to give other people lessons. I just made observations about certain matter,” said Gonsalves, whose Unity Labour Party (ULP) secured a fourth consecutive term in office in December 2015 in elections that the NDP claims were stolen.

The prime minister said the important thing is that congratulations are in order for Chastanet and the UWP.