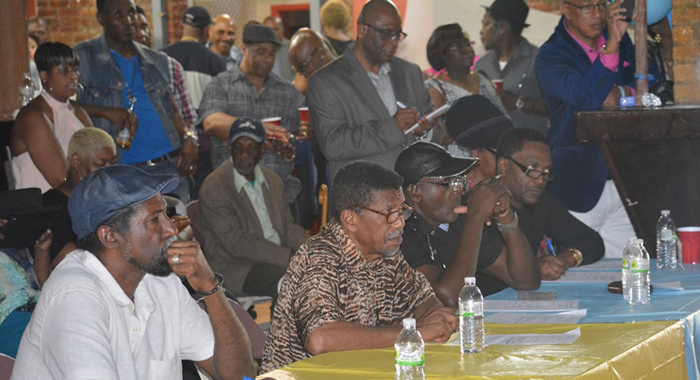 Judges and patrons at Saturday’s show in New York.

NEW YORK — Fifteen calypsonians overcame a less than perfect band and sound system and delivered well before the panel of judges during the New York round of the preliminary judging in the St. Vincent and the Grenadines National Calypso Monarch competition 2016.

During Saturday’s show, the bards from the Dynamite Calypso Tent, based in this North American city, attempted to impress judges Osborne Bowen, Earl Paynter, Wollis Christopher, Cecil “Blazer” Williams and Daniel Hall even as the singers tried to cope with the performance of the band, Lambert and the Matadors.

The judges had travelled from St. Vincent and the Grenadines to New York to assess the offering of the nation’s North America-based calypsonians.

The first artiste to take the stage was Vincent “Groovy D” Kennedy, who in his song “Natural Beauty” highlighted the significance of people, especially black women, being conscious of their natural beauty and putting away their hatred against it. He pointed out that people will go to any extent to change their natural look and their natural hair.

Then Michelle “Hibiscus” Hillocks, the winner of both the New Song Competition and the New Break-out Artiste prizes of the Launch of Vincy Mas in the USA on May 7, took to the stage and delivered her well-received calypso titled “No Honour” in which she critiqued the attitude and practice in SVG where Vincentian-born calypsonians who live outside of the country are given no honour in their country of birth. She reminded the audience that calypsonians are true representatives of SVG; they are the grassroots of the people, yet they are treated badly. Hibiscus urged the nation to move away from this sort of disrespect.

Dennis Bowman was next to deliver his calypso, “Take Care of SVG”. He made a firm appeal to Vincentians to forget about politics and remember what Hairouna means to them. He urged the people to further develop their community spirit and show more love and cooperation in order to take care of SVG. He reminded Vincentians they are custodians of SVG.

In a well-liked performance and hard-hitting political commentary, Joel “Navel String” Bartholomew, in his song “Power Hungry”, directed his critique at the New Democratic Party (NDP) and Opposition Leader Arnhim Eustace. Navel String chided Eustace for his approach to the recently held general elections in SVG. The singer criticised the politician’s refusal to accept the results of the elections and asked if “you think is so man does win a country”.

Moving from the hard-core political commentary, John “The Truth” Dougan, in a social commentary, “Togetherness” gave his message for the immediate post-election phase in SVG. He appealed for harmony and begged nationals to give unity a chance. He pleaded to Vincentians to unite and to address effectively challenges such as insensitive ways of expressing oneself, political party divisiveness, and stereotyping of SVG.

Performing for the first time in the Dynamite Calypso Tent, Prim Adonna, in a reflective and critical mood, delivered a soulful rendition titled “Crisis”. In the song, she highlighted the criticisms levelled against her but said she has “no business with that” because it is her world and she shapes it how she wants to. She pointed out that people criticise her status in the calypso art form, her sexiness, and might criticise her kind of hair and her light-skinned complexion but she does not make that worry her.

Delano “D-Tecta” Joseph in his offering, “Welcome to SVG” said that despite the doom and gloom disseminated by some people about SVG, there was much that can be paid tribute to in SVG. With pride, he declared SVG is a magical place to be. He spotlighted SVG’s clean water, absence of acid rain, mind-relaxing atmosphere, freedom of movement, and emerging infrastructure like roads that will unite the country more. However, he acknowledged the road is long and challenging but many things about SVG are getting better.

In a lamentation, “Cyring Fuh Me Country”, Ramon “Jose Juan” Diaz wailed about the law and order, and political situation in SVG and the deterioration of social stability. This situation forced him to cry. He singled out “wicked politicians” who are making the situation worse. But he then warned the nation that crying will not change anything unless the people get serious about changing the conditions that make them cry.

Francis “Stryker” Brown, in his song “The Unexplained” expressed dislike for the way some Vincentians go about giving their country of birth a bad name. He declared that he is ashamed of how some people behave so negatively. According to him, these sorts of attitude and behaviour are unexplainable.

In a crowd pleaser, Maxwell “Zeagay” Samuel, in his offering titled “Cocaine by the Kilo”, described the impact of the terrible cocaine phenomenon in SVG, killing off and mashing up the people. He reminded the audience that when the healing of the nation was dominant things were better; but now is cocaine by the kilo mashing up SVG. Not even the Jack Iron was bad like this cocaine. He lamented that cocaine is wreaking havoc in the ghetto. He called for liberation away from cocaine.

Kenroy “Jakie” Jack, in his song, “Do it now” demands that Vincentians do more to stop the problems the populace face. He stressed that all over the country is murder, robbery, and hunger. He demanded that the people do something to stop these social evils and all the crying. He emphasised to do it now! Do it now! Make the country happy again.
In his song “Get Off Me”, Mervin “Bobb M.C.” Bobb shared an experience of a romantic affair where the woman is cheating on her husband and urges her lover to get off him before her husband comes home.

Ending the competition was Carlos David “Chang I” Morgan who, in his song “Mama”, paid an emotional and energetic tribute to his mother. He proudly declared that no matter where he roams he will always show love to his mother. Her love and advice is his guiding light. She made him the man he is. He shared with the audience his mother’s experience working hard in the fields to provide for her family.

For 15 years the Dynamite Calypso Tent has found a way to make outstanding contributions to the development of SVG’s premier cultural arts festival dubbed “Vincy Mas”. This was recognized in statements made during the opening ceremony by Ainsley Primus, President of the Dynamite Calypso Tent; Earl Bennett, President of SVG Calypso Association; Hon. Selmon Walters, SVG Consul General in the USA; and Hon. Cecil Mckie, SVG Minister of Sports, Tourism and Culture. This year the Dynamites have once again provided evidence of their contribution to Vincy Mas, and culture in general.

Twenty semi-finalists will be chosen from New York and across SVG to compete on June 24 in Kingstown to be among the 10 who will challenge the reigning monarch, Zamfir “Man Zangie” Adams during Dimanche Gras in Kingstown on July 3.