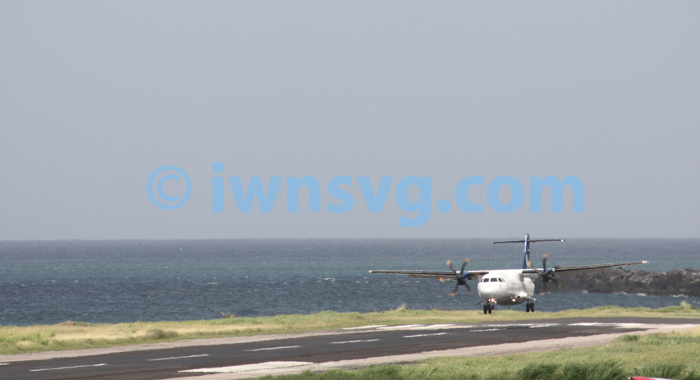 A LIAT aircraft aborted a landing at the E.T. Joshua Airport at the last moment around 9:20 p.m. Friday because a laser beam was pointed into the cockpit.

“The aircraft was very close to touchdown when it had to “pull up”’ and abort landing,” Director of Airports, Corsel Robertson said in a statement on Saturday.

Robertson said that the fact that the pilot had to abort the landing gives an indication of the seriousness of this act.

“The pilot needed to take drastic action to prevent what could have been a major accident,” she said.

A decision was made to divert the flight in the interest of safety, and the flight returned to Barbados without landing at the E.T. Joshua Airport.

“This is a very dangerous practice. A laser beam can blind or impair the vision of the flight crew to the extent that it can cause an accident or crash. To deliberately point this light at an aircraft is to threaten the safety of the passengers, crew, aircraft, property and lives on the ground, and civil aviation in general. This can lead to the loss of lives and should not be taken lightly,” Robertson said.

She said the act is a considered a very serious offence and would be dealt with under the full severity of the law.

“Persons who have engaged in this dangerous practice are strongly urged to cease and desist from repeating such an offence.”

She said the pilot has reported that the beam seems to have originated in the Dorsetshire/Queens Drive area.

“The cooperation of the general public is solicited in the protection of its fellow members who travel by air. Please refrain from engaging in any such act and discourage anyone whom you know maybe considering such an activity. You should also report anyone who carries out such activities,” Robertson said.

“Once again, I am appealing to the public not to engage in pointing laser lights at any aircraft and if you see or know anyone who is considering or doing so, please report it to the Police or the Airports Department at 458-4011,” Robertson said.