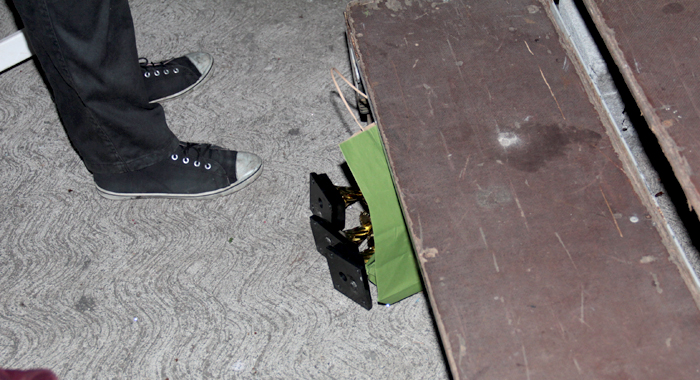 The ever-present claims of “cheating” at beauty pageants in St. Vincent and the Grenadines moved up a few notches on Friday at the Miss P’tani pageant 2016.

Second Runner-up Keishell Robertson –Miss Fanfare Events was evidently not pleased when she was announced in that position of the show, which was won by Regisha Hazell — Miss Dazzle.

Robertson, who turns 23 on June 25, seemed very unwilling to step forward to be sashed by chair of the organizing committee of P’tani Carnival, Ronnie Marks.

The contestants finger also drummed against the trophy she was holding in her right hand as part of her winnings, which included best talent and most photogenic.

But whatever composure she was able to return to as she posed and smiled for the camera along with Hazel and First Runner-up Lourie John — Miss People’s Pharmacy, disappeared shortly after the show.

Robertson’s trophies were dumped on the ground back stage and a woman, said to be one of her close relatives, registered her disappointment with the results.

She told Marks that Robertson had worked hard and was up late at night preparing for the show.

Marks noted that all the contestants had worked hard and pointed out that a panel of five judges had assessed all of the performance of the contestants and decided the winners.

At one point, Robertson’s trophies were under the step leading to the stage and Miss P’tani 2015, Kelisha Henry picked them up and returned them to Robertson.

But the adult relative told the contestant to give the trophies back to the organisers.

It is not clear if Robertson would accept from the organizers her EC$500 appearance fee as well as the $800 cash prize, and smartphone from Digicel, and gift baskets for Second Runner Up and winning the Talent segment of the show.

Robertson’s talent piece was a dramatization bemoaning the demise of some elements of Vincentian customs.

The props included a tombstone and a real casket in which she left the stage carried shoulder high.

In the interview segment, she was asked:

“You stated that you are ‘a creative, amiable and optimistic person who thrives on learning and experiencing new things’. How has your thirst for learning helped you in life?”

Robertson responded: “My thirst for learning has opened many gateways in my life. It has motivated me to pursue my nursing education. Achieving this would help me in my lifelong goals to become a successful, phenomenal, independent woman.”

Her second question was: “Who is that one influential person you would want to meet and what do you want to learn from him or her?”

Robertson said:  “That one influential person I would like to meet would be the great Michelle Obama. She’s the epidome (sic) of a strong black woman. I’m attracted to her drives and her dedication because she stands up for what she believes in. One thing I would like to learn from her is how to become successful by changing my mind-set.”

Her evening dress was described in the following way:

“My body covers the earth and manipulates everything that lies beneath. The sun and the tide, the grass and the seasons, the rain and the sunshine. I am Athena, the goddess of the Skies. Teal to represent my complexion on dry, sunny morning; nude, which is symbolic of my unadulterated serenity. I am goddess. Golden appliqué adorn my back and my sleeves because I epitomize royalty. I am pleased to partner with contestant number 6 to show you an embodiment of my greatness. She wears me commandingly and I hug her body firmly, almost like a twin, her voluptuous physique embraces me. My trail is seasoned with petals, an immense portrayal of life, which we so strongly embrace. My partner has taken the time to adorn me with golden cuff, because together we rule P’tani and tonight I partner with contestant number 6, Keishell Robertson. See me, embrace me, love me; I am Athena, goddess of the Skies.”

Robertson’s biography says she attributes her positive upbringing to her education at the Mountain View Adventist Academy and the St. Vincent and the Grenadines Community College.
She “enjoys singing, dancing and acting personalities” in her spare time.  She describes herself as self-driven, hard working, cheerful and compassionate to others.

“She admires her mother the most because she is the epitome of strength, passion and perseverance in a woman,” the biography says.