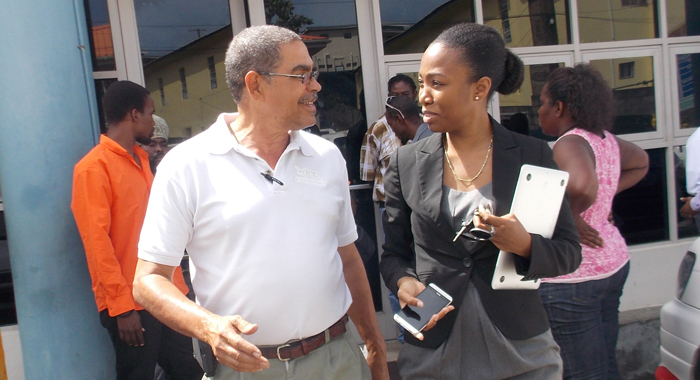 Magistrate Bertie Pompey on Tuesday recused himself from the matter involving NICE Radio’s managing director, Douglas De Freitas, the second such decision by the judge in as many days.

DeFreitas is charged with making a statement likely to cause fear or alarm.

When DeFreitas’ matter was called, the accused businessman and radio personality said his lawyer, Kay Bacchus-Browne was not present because she was at the High Court on another matter and the other lawyer holding for her, Maia Eustace, was engaged in some other matters.

The magistrate, however, decided to put the charge to DeFreitas in the absence of his legal representatives.

But, state prosecutor Kareem Nelson got up and requested that the matter be stood down for a while to give DeFreitas’ lawyers a chance to arrive.

The magistrate told the prosecutor that he wanted to read the charge to him but he was not going to hear the matter because he had “a particular course of action” he was going to take.

The magistrate stood the matter down as suggested by Nelson.

Minutes later, Eustace arrived in court and apologised, saying she had a number of matters which caused her to be rushing to and fro. She confirmed that she was holding for Bacchus-Browne who was before Justice Henry at the High Court and informed the court that she was awaiting further instructions from her on the manner to proceed.

Eustace minutes later told the court that Bacchus-Browne was unable to attend court and was requesting the charge be read to DeFreitas and that an application be made to the court for full disclosure of evidence from the prosecution. At that point, Pompey stated that he was recusing himself because there was a matter involving DeFreitas and himself which was pending before the civil court.

The Kingstown Court Magistrate sent the matter on to the Calliaqua Magistrate Court.

DeFreitas is expected to appear before that court in September for a trial date to be set.

The Magistrate did not read the charge to DeFreitas.

According to the charge sheet, DeFreitas is charged that on Dec. 10, 2015, at Dorsetshire Hill, he published a false statement to wit: “I have just had confirmation that six (6) of the ballot boxes were unsealed and one (1) missing. Six (6) of the ballots were unsealed and one (1) missing. It means that something went on down there in the polling station and we are calling for by-elections by Monday. We want by-election, we don’t want… And I want the leadership of the NDP to find some transportation, get supporters to go down there and to get into the place, please and persons who can go on their own, go down there and support Exeter on this matter”.

The Crown is alleging that the reported statement is likely to cause fear or alarm or to disturb the public peace.

2 replies on “Magistrate recuses himself from NICE Radio boss’ trial”