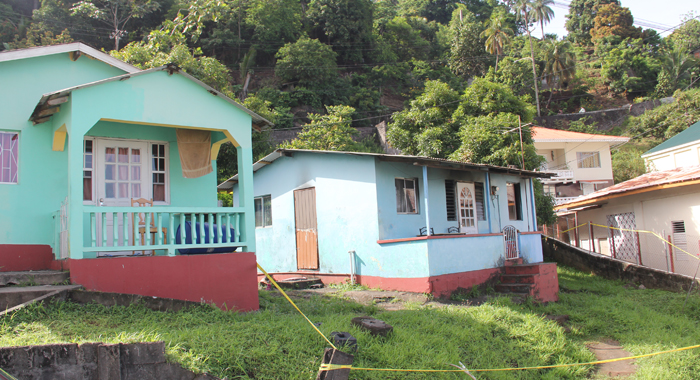 Nanton lived in the house at the right, which is located next to his stepdaughter’s house, left. (IWN photo)

An elderly man died in hospital about 4 a.m. Saturday, some eight hours after a mysterious fire at his Lowman Leeward house, which some villagers say shows signs of firebombing.

Lynch, who lives next door to Nanton, was also his caretaker.

She told iWitness News on Sunday that she visited Nanton about 8:10 p.m. Friday and fed him before going back to her house.

Lynch said that while in her house a few minutes later she smelt something burning then heard the sound of glass shattering.

She said she looked over to Nanton’s house but did not see anything. She went inside her house and looked across at the back of Nanton’s house, where she saw fire on his septic tanks.

Lynch told iWitness News that she became scared and locked her door.

Her son came shortly after and mentioned the fire.

“And so I said ‘Come, don’t go over there.’ and I locked me door,” Lynch told iWitness News.

She said there was a service at a church nearby and the worshippers and villagers came to the scene.

Lynch said that when she saw the fire she did nothing besides locking up her house.

She said she called one of Nanton’s daughters but did not get on to her.

“And I was trying to call the police. You know when you thing you so confused. I called [the] police but I did not get to them. I called 61750 (Questelles Police Station). I did not get on.”

She said villagers took buckets of water and threw them on the fire and Nanton’s grandson broke a window toward the back of the house and went inside.

He met his grandfather, who is very sick with prostate cancer, in front the kitchen door, with burns about his body, Lynch said.

She told iWitness News that Nanton was then taken to her house and put to lie down in her house before they were able to get a ride into Kingstown.

“I cannot say who do it. I don’t know how the fire [started]. That is what I mean to say. He accustomed to be over there by himself,” Lynch said, but told iWitness News that Nanton lives with his son and grandson, but they are not normally at home.