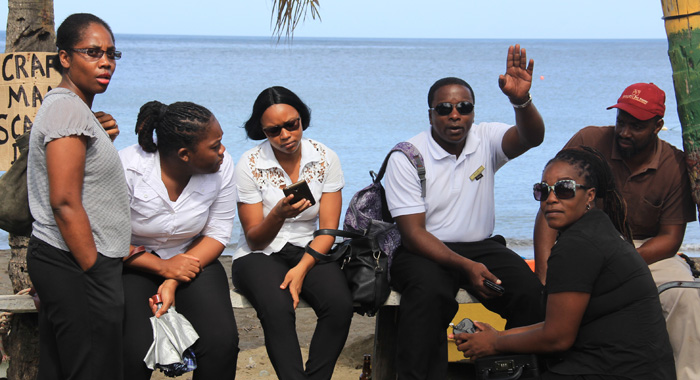 Workers at the spa at Buccament Bay Resort sit on the beachfront on Wednesday. They went on strike over non-payment of wages. (IWN photo)

Workers from several departments of Buccament Bay Resort went on strike Wednesday morning over non-payment of wages, the second such industrial action since December.

But unlike the industrial action six months ago, when construction workers downed their tools, Wednesday’s strike action included staff from the resort’s engineering, housekeeping, and maintenance department and the staff at the spa.

A worker told iWitness News that she is yet to receive her full salary for May, although she has been paid three times since.

She did not disclose her full salary, but said it is more than EC$1,000 per month.

One man, who said he is married and has children, told iWitness News that he needs his money to take care of his family and pay his rent.

He has children ages 7 and 8 years old.

He told iWitness News that he works for EC$1,300 and takes home EC$1,200-plus, after tax and social security deductions.

A single mother, who has an 11-month-old child, was among the workers on strike.

She said that the management of the resort gets “vexed” whenever workers complain about their salaries.

Another worker said that her immediate manager is in a similar position and has complained about not being paid for three months.

Ames, who was born in the United Kingdom and also has Vincentian citizenship, is charged, among other things, that he failed to pay to the Comptroller of Inland Revenue EC$1,291,558.14 deducted from remuneration paid to employees between Jan. 1 2012 and Dec. 31, 2013.

iWitness News contacted the resort on Wednesday and was told that the manager was not in.

We left a request for her to return a call to us and will publish the response of the resort, if it becomes available.