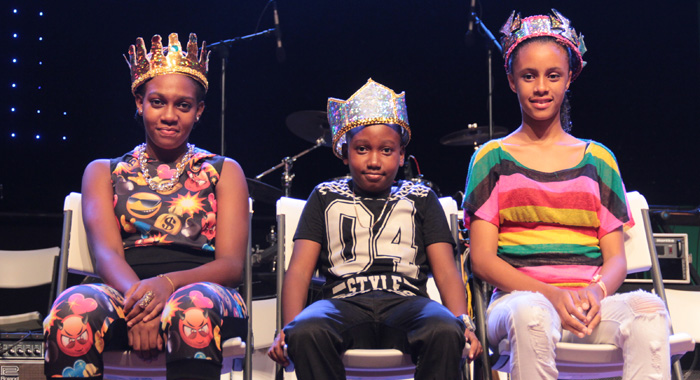 As she sat next to her younger brother, a crown on each of their heads, Kristiana Christopher beamed with pride.

“It was supposed to happen a long time. It feels very nice,” she told reporters.

Kristiana said she felt “very proud of myself”.

Her brother, Kristian Christopher of Layou Government School, had retained his crown in the Primary School category of the Junior Calypso competition.

Kristiana had won her sixth crown, including a hat trick, in seven years of competition.

She has her eyes on the “Big Yard” — competing, in time, in both competitions at the national level.

And she seems to have already begun to make the right connections.

Kristiana’s winning song, “Flatten the Place/Bulldozer” was written by reigning National Ragga and Power Soca Monarch, Skinny Fabulous, one of the most recognised names in soca across the region, who has also broken into the international market.

Kristiana’s advice to young artistes is: “Come out, deliver your song, and that’s all.”

At Tuesday’s competition, Kristiana filled the void left by 2015 winner, Kelisa “Singing Kelly” Barker of North Union Secondary, who did not compete.

Second place in the Junior Soca competition went to Delano Lavia of the Sandy Bay Secondary School, who sang “Rebellion”.

Kristian, singing “Break the Silence”, defeated six other challengers for the crown in the Primary School category of the competition.

The song called on persons to break the silence on the abuse of children.

A shy sounding Kristian said he felt “good” and “great” about winning.

His calypso, like his sister’s, was written by their father, Wallace Christopher, who also penned the popular 2015 election campaign song, “Terminator” and other calypsos sang by his children in the Junior Calypso competition over the years.

In the Secondary School category of the calypso competition, her schoolmate, Tia Wyllie, edged out Kristiana.

Wyllie performed “Don’t Give Up”, while Kristiana sang “We Have Come Far”.

“I am feeling excited because I had the feeling that I would have won the crown,” said Wyllie a 13-year-old Form 2 student.

“Don’t give up on yourself, just have faith in God and he will do it for you,” advised Wyllie, who has competed three times, placing second in 2013 and won the Primary School crown in 2014.