Argyle Airport CEO quits after 6 weeks on the job 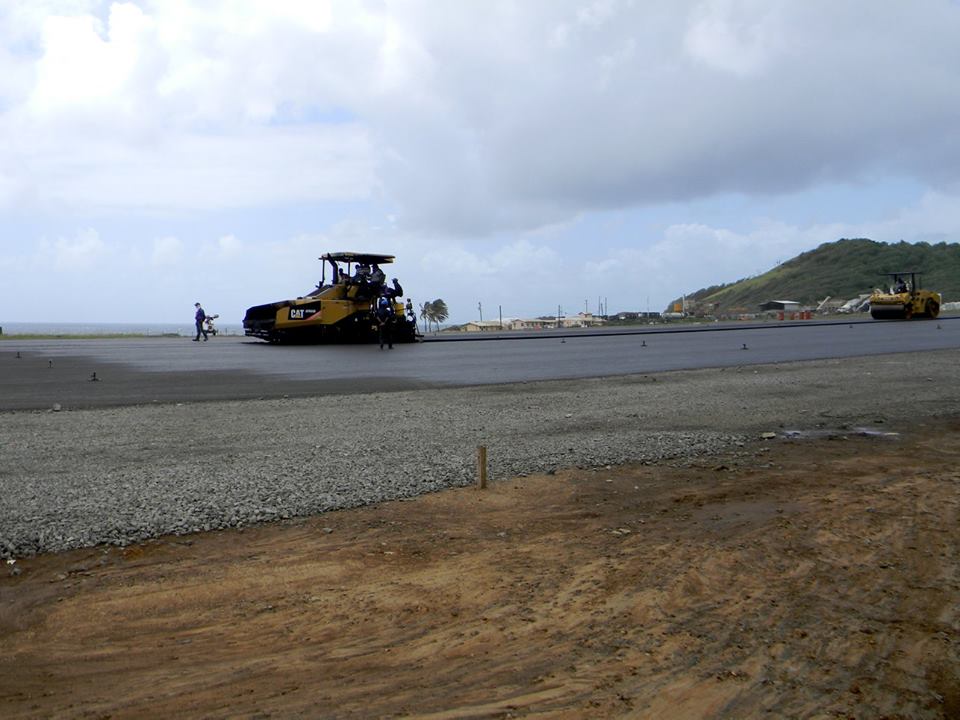 Final pavement on the runway continues, according to this photo uploaded to the Friends of AIA Facebook page on June 30.

The Argyle International Airport has lost its first chief executive officer (CEO) even before the long-delayed facility is completed or operating.

Garth Saunders, chair of the Board of Director of Argyle International Airport (AIA), the state-owned firm managing the airport, confirmed this to iWitness News on Wednesday.

iWitness News sought the confirmation after Leader of the Opposition Arnhim Eustace said on his weekly radio programme on Monday that the CEO had quit the job.

Eustace also said the CEO resigned because he felt that the EC$729 million airport — which has missed a number of completion targets since 2011 — would not be approved for landing aircraft.

He said that the executive, who had been hired on contract, submitted his letter of resignation two to three weeks ago.

Saunders, an engineer, said he had no reason to believe that the CEO had quit for other reasons than those stated in his letter.

“I have no reason to think so at all,” Saunders told iWitness News.

iWitness News understands that the CEO, who was never named publicly, was a retiree who is around 70 years old.

The resignation of the CEO is the latest blow to the project that came wrapped in political garbs when it was announced in 2005 and has divided Vincentians largely along political lines.

Prime Minister Ralph Gonsalves announced on Monday that the airport would not be completed by the end of this month.

Chair and CEO of the International Airport Development Company (IADC), economist Rudy Matthias said on April 1 that all construction work would be finished by the end of May, regardless of the weather.

Saunders told iWitness News that he has been “given stick” (criticised) for saying that the IADC has not been realistic with the completion targets that it has repeatedly given to the public.

The engineer, who has more than 30 years experience in construction, told iWitness News that with the amount of work excavation work remaining on “Petroglyph Hill”, he does not anticipate that actual construction would be complete before the end of August 2016.

Speaking on his radio programme on Monday, Eustace pointed to the airport as proof of the “incompetence” of the ruling Unity Labour Party.

“If you want further proof of this incompetence that you have in this Government here, you cast your mind out to the Argyle international airport,” he said in the programme in which he accused the Government of being incompetent in the management of the tourism sector.

“He has not lived up to any one of those promises,” the opposition leader said.

“What we have now is hundreds of millions of dollars in debt. The airport, whenever it is finished, will cost over the $1 billion that we projected. I will be proved right when I said some years ago, that’s where we are going to end up — over $1 billion.”

Eustace, an economist, said the airport would also make it impossible for St. Vincent and the Grenadines to achieve in the medium-term the international standard of a   60 per cent debt to GDP ratio.

He noted that the Government had said that the airport would have been finished for Carnival 2016.

“The bottom line is that Gonsalves did not plan this project properly because he doesn’t know how to plan anything. Where is the Cross-Country Road? Where is the National Stadium?” Eustace said, mentioning two major projects announced by the ULP but shelved after initial work.

“All of those were promises. Where is the economic take-off he promised since 2008? This project is now a national disaster and it is a man-made disaster created by hurricane Ralph,” Eustace said of the airport.

He further noted that the government owes landowners whose properties were acquired to facilitate construction of the airport.

“Some have gone to their graves and still haven’t gotten their money…” he said.

“Make no mistake about it. All of this comes back to the door of Gonsalves. A man who likes a lot of old-talk and sweet-talk but basically incompetent when it comes to doing something to actually benefit the country. A man who cannot deliver the goods for the people of this country,” Eustace said.

But Saunders told iWitness News that while persons are commenting about the departure of the CEO from AIA, they do not mention the fact that there are three managers working with him at the airport.

They are an operations manager, human resource and finance manager, and a handling services manager.

“Everybody is saying ‘Well, the CEO resigned’ but nobody wants to investigate and say things are happening, people are working,” Saunders said.

He urged persons to move beyond the politics surrounding the airport, saying that if it fails, it would cost the country even more.

Argyle Airport will not be complete by month end