Calypsonian not guilty of threatening to kill PM — lawyer 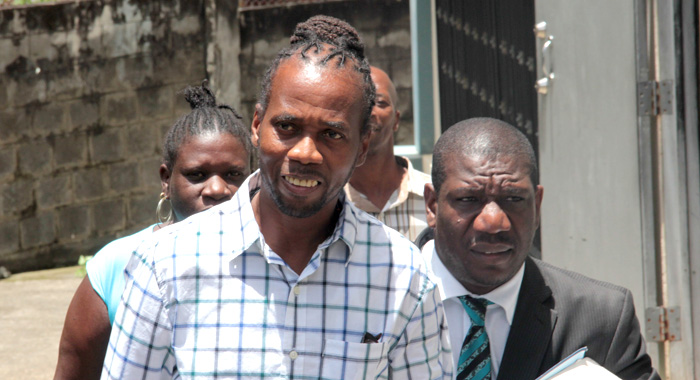 Israel Bruce, lawyer for New York-based calypsonians, Paul Scrubb, who is facing charges of uttering seditious words and threatening to kill Prime Minister Ralph Gonsalves and his family, says his client is innocent and has accused the Government of engaging in a witch-hunt.

Scrubb appeared before Chief Magistrate Rechanne Browne Matthias at the Serious Offences Court in Kingstown on Monday, where the charges were read to him.

He was arrested on Friday at E.T. Joshua Airport as he was about to leave St. Vincent and the Grenadines after five weeks in the country.

The calypsonian, who uses the stage name “I-Madd”, is charged that between Dec. 9 and 31, 2015, he “maliciously sent or uttered threats to kill, to wit, ‘Ralph Gonsalves should be assassinated, also his whole damn family period; … Blessed love’, contrary to section 165(1) of the Criminal Code”.

He is also charged that between Dec. 9 and 31, 2015 he “uttered seditious words, to wit, ‘‘Ralph Gonsalves should be assassinated, also his whole damn family period; … Blessed love’ contrary to section 53(1) (b) of the Criminal Code”.

Scrubb was not required to plead when he appeared in court on Monday.

The prosecution did not object to bail, which was granted in the sum of EC$25,000 with one surety.

Additionally, he is to report to the Calliaqua Police Station on Mondays and Thursdays between 6 a.m. and 6 p.m., surrender all travel documents and obtain the permission of the court to leave the country. Stop notices have been placed at all ports of entry and exit.

A preliminary inquiry into the matter has been slated for Oct. 31.

Speaking to reporters after the court hearing, Bruce said that his client is innocent of the charges.

“Mind you, the utterances, as alleged, were not made by this man; not by this man. But that is a legal hurdle which I will not address,” he said in the interview in which he said the government was trying to intimidate its critics overseas.

Bruce noted that Scrubb was arrested at the airport after spending five weeks in the country of his birth.

“What is exciting to note is that Mr. Scrubb [was] in St. Vincent for five weeks and on the very day he was about to board the LIAT aircraft, he was taken from the airport terminal and he was taken to the Central Police Station, he was interviewed and then charged.”

He further noted that the prosecution said while the charges were being brought seven months after the offences were allegedly committed, the Crown asked for three months to prepare its case.

“So I wonder where is the application of the Full Code Test.”

The United Kingdom Crown Prosecution Service (CPS) says on its website that the Full Code Test has two stages: the evidential stage, followed by the public interest stage.

The CPS says: “In most cases, prosecutors should only decide whether to prosecute after the investigation has been completed and after all the available evidence has been reviewed. However, there will be cases where it is clear, prior to the collection and consideration of all the likely evidence, that the public interest does not require a prosecution. In these instances, prosecutors may decide that the case should not proceed further.

“Prosecutors should only take such a decision when they are satisfied that the broad extent of the criminality has been determined and that they are able to make a fully informed assessment of the public interest. If prosecutors do not have sufficient information to take such a decision, the investigation should proceed and a decision taken later in accordance with the Full Code Test set out in this section.”

Bruce was satisfied that one element of the Full Code Test was met but raised questions about the other.

“Clearly, if you have a matter like for which Mr. Scrubb is charged, there is a national interest. But, where is the evidential sufficiency? If you had that, why would you need three months as of today’s date to investigate then before you can properly lay your case in the court?

“That says to me, again, it is witch-hunting. And it is intended to satisfy some of the available positions that are in the Cyber Crime Bill that is not yet an act,” he told reporters.

The Cybercrime Bill, which is before a select committee of Parliament, will criminalise certain activities on the internet, and the draft includes a section that will allow the Government to extradite Vincentians overseas under the Fugitive Offenders Act.

Bruce said the prosecution of Scrubb is the Government’s way of sending a message to Vincentians in the diaspora “wherever you are, do not say anything because when you come to St. Vincent, we can use our powers of arrest and arrest you.”

He noted the implications of the court proceeding on Scrubb’s employment in the United States.

He noted that the offences were allegedly committed in December 2015

“So you have between December and July. So, in seven months, you couldn’t have enough evidence to bring the charge, but you want three more months and in three months you will be able to do it. Now, let the ordinary man who is listening to this and hearing this come to one conclusion: the ultimate objective is scaremongering; to scare people like Paul Scrubb and the others. But for those who intend to succeed on scaremongering, they must get the message. It will not work. People in the diaspora will be resolved to speak about the issues in St. Vincent,” Bruce told reporters.

(Update: The following video was added after this article was initially published.)