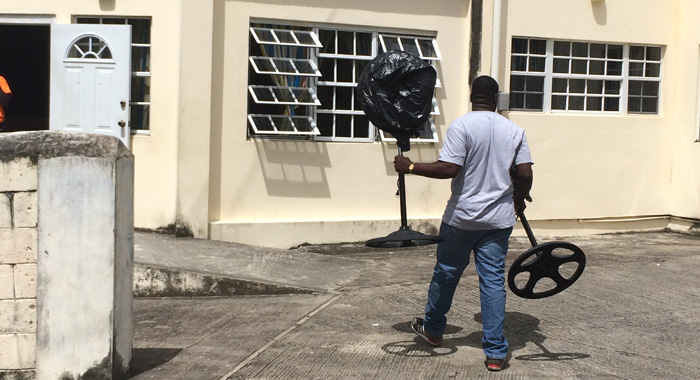 A man arrives with two fans at the Lowmans Windward Clinic on Monday. (IWN photo)

What has been described as a “rant” — reportedly by a state-employed physician — at a government-owned health centre has resulted in the donation of two fans to the health care centre.

In a recording making the rounds in some segments of the media, a male is heard saying “… so you all get together as a group, say, ‘Listen, the clinic is extremely hot, we need some fans”.

Some media houses have identified the voice on the recording as that of a state-employed doctor. However, iWitness News has not been able to independently determine the identity of the speaker or when the recording was made.

The recording was reportedly made at the Lowmans Windward Clinic.

In the recording, the man says that it is a “nice, Christian elderly lady next door who normally lend me a fan, but she probably need it today. And if I get out the clinic and walk out, you all going say something else,” the man said.

He also complains about the road, saying he almost had to leave his car some distance away because of the condition of the road.

“Why don’t you all lobby to get the road fixed? What are you all doing?” the man says, adding, “And because yo’ talk, yo’ don’t love Labour. What kind of nonsense is that?”

The man later says that “if it gets too medically uncomfortable down there, I will have to stop.

“You all understand me? I can’t do this. The room is extremely hot and it doesn’t have to be like that. All they have to do is donate some fans. He can buy it from his pocket and all if he wants to, but he is supposed to love you. That ain’t what Labour love is?”

The man mentions the name “Dr. Goodluck” and, amidst the chatter, what appears to be the voice of an elderly woman is heard saying, “‘tend to me! ‘tend to me and stop study them dey”.

On Monday, iWitness News visited the Lowmans Windward Clinic, where the rant is said to have taken place.

We arrived just in time to see a Ministry of Agriculture vehicle arrive and a man exit and take two standing fans inside the facility.

We were told that the fans were donated by Member of Parliament for South Central Windward, where the clinic is located, Saboto Caesar, who is also Minister of Agriculture.

Residents of the area told iWitness News that the sections of the road that the man was referring to had been dug out because the road was being repaired.

iWitness News saw what appeared to be recently-poured concrete and we were told that the repairs were made after the “rant”.

Social media posts in Caesar’s name suggest that the road repairs were underway since July 16.

We understand that the area where the doctor sees patients did not have a fan or air conditioning but has several windows.

Residents told iWitness News that the clinic does get very hot at times as a large number of persons go there to see the doctor.

They spoke highly of the doctor who serves the clinic, saying that he arrives very early and attends well to persons visiting the clinic.

Meanwhile, iWitness News understands that the repair of the roads outside the clinic, which is being done as part of a self-help project, was affected by the theft of cement procured to be used on the project.

Additionally, a generator was stolen when the clinic was burglarised last week Tuesday night, we were told.

One reply on “MP donates fans after ‘rant’ at clinic”