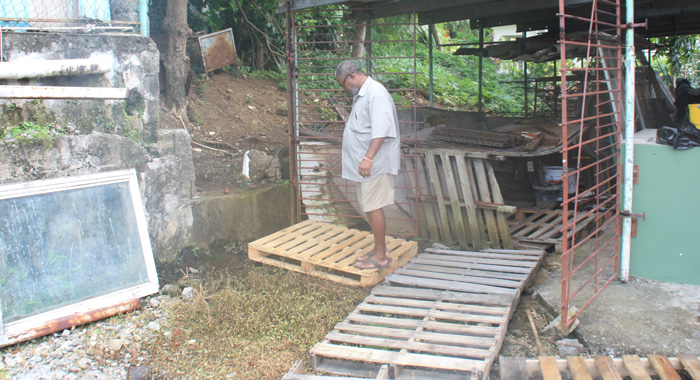 Fountain resident Stephen Pollard is using wooden pallets to get around certain parts of his home. (IWN photo)

For the second time in three months, Fountain resident Stephen Pollard is using the media to appeal to his neighbour to address a water problem that is affecting his property.

He is frustrated by Government inaction as well as the response of some fellow supporters of the ruling Unity Labour Party (ULP), who he said has criticised a host of a pro-ULP radio programme for allowing him to use the show to highlight his problem.

Pollard, a Barbadian who is married to a Vincentian, said that for ten years, water has been seeping from the nearby business place of Trevor Pile and into his yard.

So bad has the situation gotten that Pollard has placed wooden pallets on certain sections of his yard to allow him to walk around the property without having to put his foot in the water.

When iWitness News contacted Pile in March, he said he had rerouted the wastewater from his property to the front of his building.

He said the wastewater of which the Pollards complain is actually coming from another neighbour’s property.

He accused the Pollards of undermining the foundation of the retaining wall on his property when they were preparing their land for construction.

Pile said that Pollard has been blasting his name across the country and said that if this continues, he would take legal action against his neighbour.

Pile told The News newspaper last week that the water is coming from another neighbour’s property and blows from the back of that property and onto his property.

But Pollard is not convinced, telling iWitness News that the water starts coming out of the ground two hours after Pile’s workers turn up for work.

“It is coming out of Pile’s property,” Pollard told iWitness News.

He said that when they started building the house 10 years ago, he spent a weekend digging tracks to channel the water around his land.

There is a pipe on Pile’s property and when it rains, the water flows out,” Pollard said.

“I tell you, if we were in Barbados, I would have already beat Mr. Pile, beat his son and I would get bail at court,” Pollard said of his fellow Barbados-born neighbour.

“But I don’t know anything about this system here. And from what little I see, I know it don’t dispense justice too kind if you come up on the wrong side of the law, especially the police first. You does get slap down you does got to call all the politicians that you know, but you done get the slap already,” Pollard said.

He said he believes some new environmental officers at the Ministry of Health will deal with the problem.

“Who is going to come here and stay here with that dirty water flowing around my yard and when they are going and coming I going put down pallets to get them off the land into the road and take them up and put them back when they come back? This thing must stop.”

Pollard also lashed out at some female supporters of the ULP, who he said, commented on radio saying that he and Pile should resolve the situation themselves.

“Rum-drinking, cigarette-smoking Miss [name omitted] — because I hear her say so on radio that nobody can’t stop she from drinking she rum and smoking she cigarette. They took Burns Bonadie to task one Wednesday for allowing me to air my views on WE FM. These people wicked. And they are women, just like my wife. They are Vincentians, just like my wife.

“And wicked […] talking ‘bout let me and Pile sort out simply because I understand they want work with them,” Pollard said.

One reply on “Fountain resident increasingly frustrated by water problem”