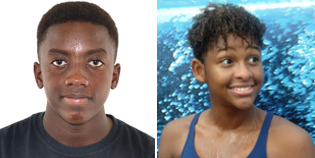 SVG Swimming Federation has announced that two of its best swimmers have been selected to represent the country at the Olympic Games in Rio de Janeiro, Brazil from Aug. 5 to 22.

The two are Nikolas Sylvester and Izzy Shné Joachim.

Sylvester, who has just graduated from the St. Vincent Grammar School and who is only 16 years old, has been the federation’s top male swimmer for the last several years.

He has represented SVG at numerous regional Swimming Championships as well as the Commonwealth Games, Pan Am Games and several World Championships. Sylvester will swim in the 50-metre freestyle race at the Olympics.

Joachim, who is also 16, is the Federation top female swimmer, Carifta record holder and has recently won the 50-meter Breaststroke in the Caribbean Swimming Championships in the Bahamas.

She will swim the 100-metre breaststroke event.

“These two youngsters are likely to be among the youngest swimmers at the Games and we understand that while they are unlikely to be medallists at these Olympics, they will do their best to represent SVG with pride and will put forward their very best efforts. Nik and Shné are gold medallists in our hearts. Best of luck to both of you and to Team SVG,” the Federation said.