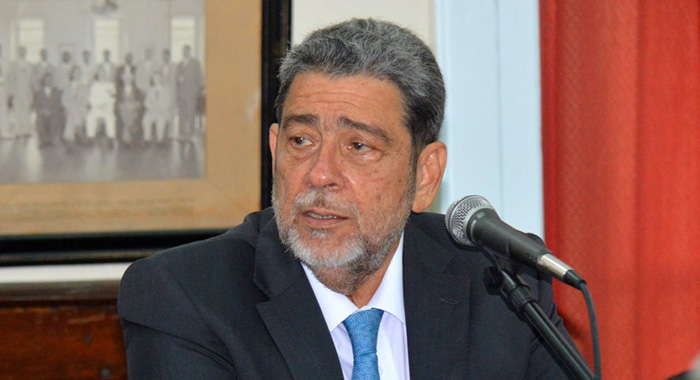 Prime Minister Ralph Gonsalves has responded to concerns by the international press freedom watchdog group, Reporters Without Borders (RSF) regarding certain elements of the Cybercrime Bill now before Parliament.

Gonsalves said that before receiving the letter, changes had already been made to Clause 16 of the Bill, about which RSF, like local press freedom advocates, have expressed concern.

In a July 29 letter copied to Minister of Information, Camillo Gonsalves, Delphine Halgand, RSF’s US Director, called for the revision of several clauses of the bill, which RSF said “are extremely damaging to the free flow of news and information and to public debate”.

Halgand said RSF believes the Internet should not escape the authority of the law altogether and believe that it is perfectly legitimate to sanction such crimes and offences as the theft of documents or data, online identity theft, cyberbullying or, even more serious, child pornography.

“However, we regard some of the clauses in this bill extremely damaging to the free flow of news and information and to public debate,” the group said making reference to Section 16 (2), which incorporates criminal libel that is already a criminal offence in section 274 of the Criminal Code.

RSF is opposed to criminal libel, but Gonsalves supports it.

Halgand noted that Section 16 (3) states: “A person who, intentionally or recklessly uses a computer system to disseminate any information, statement or image; and exposes the private affairs of another person, thereby subjecting that other person to public ridicule, contempt, hatred or embarrassment, commits an offence” can be sentenced to up to five years’ imprisonment and/or pay a fine of EC$200,000 (One EC dollar =US$0.37 cents).

RSF asked “under what criteria can information be considered to expose “private affairs” of another person regardless of factual accuracy, which this subsection refrains from mentioning.

“This provision could very easily constitute an obstacle to the dissemination of information of public interest. It could, for example, provide any demonstrably corrupt public figure with a strong argument for refusing to be held accountable.”

But in his July 29 response, Prime Minister Gonsalves said that “substantial amendments” to the Bill have already been made at the Select Committee and its report to Parliament will reflect these amendments.

“Clause 16 of which you have expressed concern was already amended prior to your letter to me, and has been further reviewed consequent upon your intervention, but I am not sure that all your queries have been addressed to your satisfaction. You will see the final product in due course,” Gonsalves said, but did not elaborate on the specific changes that have been made.

RSF is opposed to criminal libel, but Gonsalves has been ardent in his support for keeping it on the law books, a point Gonsalves reiterated in his letter, saying:

“I do not share the view that the offence of ‘criminal defamation’ has ‘a chilling effect on freedom of press and freedom of expression’. I understand RSF’s position, but I consider it to be wrong in our circumstances.”

Gonsalves said he has held this view on criminal defamation for over 48 years as a political activist — in opposition and in government, as a defence and “human rights” lawyer of 34 years standing, and as “a tireless fighter for freedom of expression, justice, fairness, and a judicious balancing of rights and responsibilities.

“The offence of criminal defamation is not a fetter on professional, independent journalists; certainly, this has not been the case in St. Vincent and the Grenadines. But it protects citizens who may be the subject of deliberate defamation by irresponsible men and women of straw who have absolutely no means to satisfy a monetary judgment awarded in a case of civil defamation: It protects, too, society; and it certainly aids peace, tranquillity, and non-violent responses by victims of defamation. In any event, the Director of Public Prosecutions is the explicit gate-keeper in any prosecution for this offence; clearly, only the most egregious cases would attract his prosecutorial attention.”

In his letter, Gonsalves said the Bill is a common piece of legislation that was drafted through “the appropriate regional mechanisms” for consideration by member-states of the Caribbean Community (CARICOM) and the Organisation of Eastern Caribbean States.

He said the proposed law is part and parcel of “a raft of legislative measures touching and concerning certain electronic and internet activities, some of which have already been enacted”.

Gonsalves said that since 2013 there have been consultations with the private and public sectors in St. Vincent and the Grenadines on this Bill by the regional drafters.

He told RSF that the Cybercrime Bill has been subjected to “informed scrutiny” by the relevant officials in the State administration, the general public, and a Parliamentary Select Committee.

He noted that the bill was published in the print media in SVG and online and electronic copies were made available to civil society organisations and personalities upon request.

“Comments by the general public were invited. Indeed, several written submissions were made to the Office of the Honourable Attorney General. These submissions, including two by independent journalists, have been circulated to the Select Committee for its consideration; so, too, has your letter.”

He noted that six members of the Government’s side in Parliament, including the Attorney General, who is a public servant, were named to the Select Committee but that the Opposition’s did not name anyone to the select Committee.

Gonsalves also told the RSF that the Select Committee has invited several persons to appear before, and sit with it, to consider the Cybercrime Bill in detail.

“The Select Committee has had several lengthy meetings on the Bill; it is conducting a detailed clause-by-clause examination of the Bill. The Select Committee is scheduled to report to Parliament on August 4, 2016, for further debate and possible passage,” Gonsalves said.