West Indies U-19 tourney goes into final round 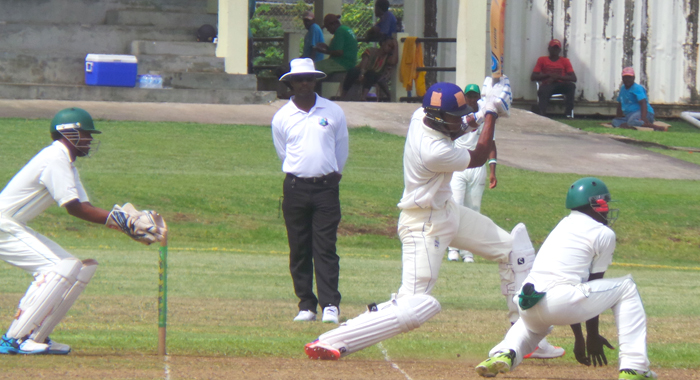 The 2016 West Indies Under 19 three-day cricket tournament went into its third and final round from Thursday with all six teams looking to improve their positions and players looking for possibly that one memorable performance that would set them on the road stardom.

The final round of fixtures will pit tournament leaders Leewards Islands against Jamaica at the Stubbs Playing Field, Barbados against Windward Islands at the main Arnos Vale Playing Field and Guyana taking on Trinidad at the Sion Hill Playing Field.

The Leeward Islands are top of the standings after thrashing the Windward Islands and Guyana both by six wickets, while Barbados who forced a draw against Trinidad after being asked to follow-on are second after their outright win over Jamaica. Trinidad who scored a massive 371 against Barbados at the main Arnos Vale Playing Field and could only claim first innings points are third after also winning on first innings against the Windwards.

Jamaica with a victory over Guyana are fourth while the Windwards who took first innings from the Leewards in a losing cause then lost first innings to TnT are fifth and defending champs Guyana with two losses including a tournament low 42 against the Leewards are in the cellar position.

In the penultimate round of matches, the Leewards defeated Guyana by six wickets inside two days at Arnos Vale, Barbados thrashed Jamaica by 113 runs at Sion Hill and the Windwards forcing a draw against Trinidad at the Park Hill Playing Field.

In the match at Arnos Vale the Leewards bowlers led by pacemen Kian Pemberton (4/28) and Javy Benjamin (3/9) and spinner Jerrickson Louis 2/0, shot out defending champions Guyana for a tournament low 42 in 14.1 overs on a bouncy pitch.

The Leewards in reply made 153 with Camron Pennyfeather getting a topscore of 48 with seven fours and one six. Spinner Kheshram Seyhodan returned figures of 6/32 while Akeni Adams took 2/34.

The Leewards with a handy lead of 111 never allowed their opponents to get back into the game and had them reeling on 107-8, though they recovered to reach 162 all out in 56.1 overs.

Sherfane Rutherford top scored with 41 in a cameo which lasted 31 deliveries as the aggressive left-handed batsman hit three fours and four sixes. Number eight batsman Bhaskar Yadram 37 and Malcolm Hubbard, added 55 for the ninth wicket before the latter perished for 35.

Needing 51 to secure their second victory of the season and a chance to claim the title, the Leewards got off to a terrible start losing two wickets for two runs but recovered to win the match for the loss of just four wickets. James was not out at the end on 22 while Seyhodan, Rutherford and Keemo Paul claimed a wicket each.

In the match at the Sion Hill Playing Field in what is a rarity left-arm spinners Deswin Currency and Joshua Bishop bowled Barbados to a 113-run win over Jamaica inside the first session on the final day of their Round TWO match.

Debutant Bishop who exploited the spin-friendly Sion Hill wicket finished with match figures of nine for 77. He was named Player-of-the-Match.

Barbados who batted first were dismissed for 149 after slipping from 89/3 to 97/7 in the space of five overs.

Captain Nicholas topscored with 41 which included three fours and one six while, Bishop 30, Shem Watson 28 and Yvan Grant 24 all chipped in with useful runs. Captain Michael Frew took 4/62 with his offspin while Brad Barnes 3/18.

Jamaica who recovered from a disastrous start at 2/6 looked well placed at 80/2 but were undone by Bishop who took 6/53.

Jordane Hill topscored with 38 and Barnes 29, the pair sharing a partnership of 74 for the third wicket, but with their departure there was little resistance.

Barbados with a lead of 25 were indebted to captain Kirton (59) who led from the front with an impressive half century on a dry turning pitch. He added 75 for the fourth wicket with Kilano Braithwaite (22) after the team had slipped to 21/3. Kirton struck three fours and two sixes in his innings, as Jeavon Royal 3/30, Javell Glenn 2/23, Brad Barnes 2/32 and Michael Frew 2/41 shared the wickets.

Jamaica set 177 for victory were in early strife as they lost opener Keshawn Beale (0) by the runout route without a run on the board and Javor Harrison (0) one run later as they ended the day two wickets for one run.

On resumption on day three the Barbados bowlers were able to slice through the porous Jamaica batting with ease to dismiss them 37 minutes before lunch.

In match three, the Windwards behind a brilliant century from opener, Anil Mathew were able to force a draw against Trinidad and Tobago at Park Hill.

Batting first the Windwards owed it to vice-captain Othneil Lewis whose 82 pushed them to a first innings score of 204. His team precariously perched at 128/8 Lewis played a counter-attacking innings which saw him hitting eight sixes and four fours off of the 53 balls he faced. Captain Emmanuel Stewart got 36 and wicketkeeper Deon Burton 31, with offspinners Jonathan Bootan taking 4/31and Kirstan Kallicharan 3/31.

Trinidad who had pummelled the Barbadian bowling for 371 in their first match looked comfortably placed when openers Keagan Simmons (55) and Dejourn Charles (40) had raised 87 for the first wicket. However the Trinidadians found the going tough and were 190/8 before eking out first innings points through the efforts of Saiba Batoosingh 45*-ending 212/9 and declaring overnight.

Left-arm spinner Rasheed Frederick 3/49 and Lewis 2/39 were the best of the Windwards bowlers.

The Windwards asked to bat the entire day on a pitch offering some assistance to the Trinidad “spin arsenal” did so with some aplomb but not before overcoming some early scares. They were in the lurch at 39/3 before Mathew and Johnel Eugene (53) added 99 for the fourth wicket before the latter went. Mathew then added a further 73 with Ryan John (57) before his long innings came to an end at 219/6 when he was caught off Jabari Mills (3/91), for 108. He faced 225 balls and struck seven fours and one six.

The Windwards continued to bat towards the close and ended 298/9 when time was called.