Deputy PM admits he was not prepared to debate Cybercrime Bill 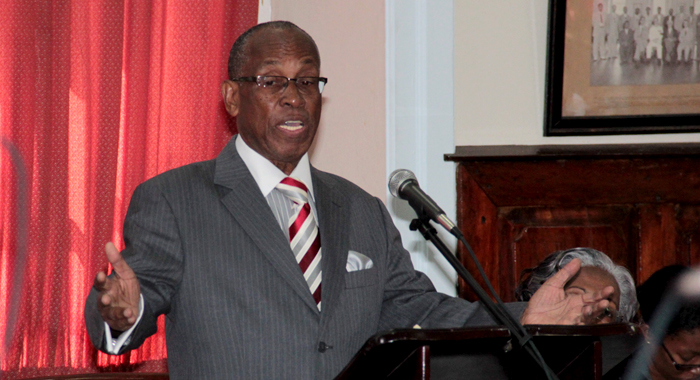 While government legislators repeatedly accused their opposition counterparts of not having read the Cybercrime Bill passed in Parliament last week, it was Deputy Prime Minister, Sir Louis Straker who admitted that he was not prepared to debate the bill.

“I had really not planned to speak on the bill neither have I done the kind of research that I would have loved to do in order to speak at any length on this bill,” Straker told Parliament as he rose to debate the bill on Friday, some hours before it was passed into law.

He, however, said the bill speaks to the protection of the nation’s people “and to prevent certain nefarious, pernicious activities which may otherwise go unpunished”.

The 74-year-old lawmaker said he does not have “the skill of the new technology, but this I do know that we are in a different age, one probably that we have gone beyond … And we have seen technology explode before our very eyes.

“My fear is not from the bill but my fear is that if we don’t have the bill what is coming up on us,” he said.

Straker said he listened to the opposition, beginning with their leader, Arnhim Eustace, who referred to a fear that has descended on St. Vincent and the Grenadines because of victimisation.

“And it appears to him that victimisation is a new phenomenon that was created in 2001 when he said he sent 541 names to the Christian Council of people who were victimised and nothing was done about those persons and he had to go to Barbados to get his message out,” Straker said in his presentation which came one day after Eustace debated the bill.

Straker, however, said that the opposition New Democratic Party (NDP) ought to know better than to advocate the idea of fear descending on SVG because of victimisation by his Unity Labour Party (ULP).

He said that Edgar Cruickshank — a former ULP activist who threw his support behind the NDP before he was killed in an accident at NDP rally in Clare Valley in 2014 — had given him a list of persons who he said were victimised during the time of the NDP, including Cruickshank himself.

Cruickshank worked at the Public Works Department from 1965 to 1983 when he was transferred to the Kingstown Town Board.

Straker said that Cruickshank’s dismissal was ordered one day after the NDP came to office in June 1984 and he was fired on July 31 that year because of political pressure.

Cruickshank never received his severance pay until 2002, after the ULP came to power in March 2001.

Straker also called in Parliament the names of several persons who he said were victimised politically by the NDP.

He told Parliament and media audiences that he supports the cybercrime legislation.

“This bill is required at this time, Mr. Speaker,” Straker said.

“I have never seen anything like this in my 74 years. We have a situation where my son who had not come down here to St. Vincent could go on the internet and could pick up the colour of my house, the style of my house, and everything right there at Ruthland Vale there in Layou, that sometimes I am afraid to come out of my shower naked,” he said to chuckles.

Straker said technology is such that it has become “intrusive and evasive and unless we are protected –. That is the fear I have. We need to be protected.”

He said the nation finds itself in a situation where “these forms of modern technology are descending on us and people can do all sorts of things and there are those who say, ‘Well, it is right and good because we must have our rights of expression.’”

He said no government has provided for citizens’ rights to express themselves as the ULP has done, noting that it was the ULP that began to broadcast Parliament live.

“This bill does not muzzle anyone but it must protect those of us who are fair game to others who seem to take licence and liberty against us,” Straker said.

He said that he left SVG sometime ago and when he got to New York someone called him expressing concern, saying that NICE Radio manager, Douglas Defreitas had said he (Straker) had to be carried out on an ambulance, had a stroke and was in intensive care in hospital.

“Must we allow this kind of nonsense to proceed without protecting people?”

The Deputy Prime Minister said the opposition is “genetically predisposed” to voting “no” on important legislation.

Straker said that one day he is going to be a private citizen again and has no fear of the bill because he will live, as he always has, within the boundaries of the law.