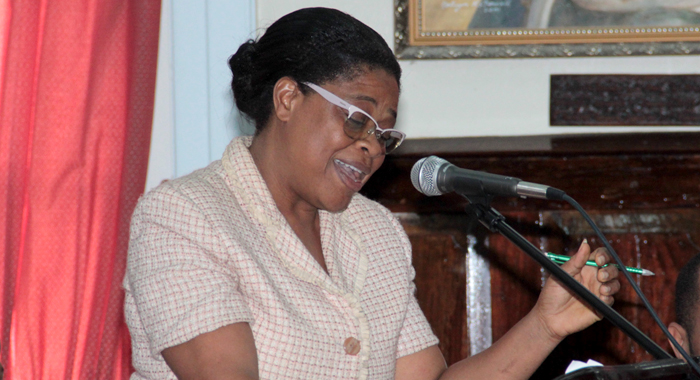 Parliamentary Secretary in the Ministry of Education, Sen. Deborah Charles is “Hitler” at home. (IWN photo)

Junior education minister, Sen. Deborah Charles on Friday, relayed in Parliament so much information about a child who has been targeted by sexual predators that it would be easy for persons to identify the child.

The misstep by Charles, who was a teacher for 30 years before entering politics, came as she tried to demonstrate that her Unity Labour Party was making efforts to protect women and young girls, contrary to the accusations of the opposition.

Charles, who is Parliamentary Secretary in the Ministry of Education, was at the time debating the Cybercrime Bill, and was attempting to show that young girls are being targeted on the internet by sexual predator, and that the Cybercrime Bill could help to protect them.

She told lawmakers that about four months ago, a person whom she identified received a call about a young lady in an area in St. Vincent, which she also identified by name.

“The child is presently at [name deleted] home. I am saying this to say, Mr. Speaker, if each of us takes the responsibility to look out for the little girls in our country. St. Vincent would be a better place,” said Charles who recently completed a degree in law and was a member of the select committee that reviewed the bill.

She told Parliament that the child’s foster parent gave her a cellphone and one night met the child with a book in her lap.

“She had a book on her lap. Now, the book was turned back to front and upside down. So [name deleted] said to her, “Are you reading?’ she said, ‘I had it on my lap long time.’”

However, the child’s foster parent’s curiosity was aroused and the parent searched the cellphone.

“Mr. Speaker, to [name deleted] great disappointment — and [name deleted] probably should not have been disappointed knowing the situation from which she had come, that young lady was interfacing with a number of men who she declared she had never met, never seen, but each of them was trying to solicit from her sexual activities…

“There are parents who are vulnerable, who do not know what to do,” she told Parliament.

Speaking later in the debate, opposition lawmaker Daniel Cummings, whom Charles failed to unseat as MP for West Kingstown in the December 2015 general elections, criticised the government legislator for the amount of information she has disclosed about the child.

“I listened and I hear the Honourable Senator Charles going into details in what is a very difficult matter without clearly thinking about what she is doing in this place,” Cummings said.

“The matter that was dealt with is a most sensitive one and I thought that so much information was given that it would not be difficult for people to identify the young child… One has to be careful in these matters,” the opposition lawmaker said.

Cummings said Charles had further given the impression that the cybercrime legislation is going to solve the problem she described.

“And I said to myself, ‘Gee-whiz, who didn’t read this bill?’” Cummings said, even as he acknowledged that there are parenting, societal issues that need to be addressed.

“But this bill isn’t going to deal with these kinds of issues. We need to understand how legislation works,” Cummings said and asked if the government was saying that they are going to have police to monitor everybody’s cellphones to see who is getting at young children.

“… parental guidance and control, that’s where the problem falls down… We need to go back to basics,” Cummings said, adding that politicians have to set the example and asked why, after so many (15) years of the Unity Labour Party administration, its promised integrity legislation is yet to be brought to Parliament.

Cummings said that while there are good clauses in the bill, there are others that opposition MPs find unacceptable and voted against it.

The bill was passed into law Friday afternoon, after two days of debate.