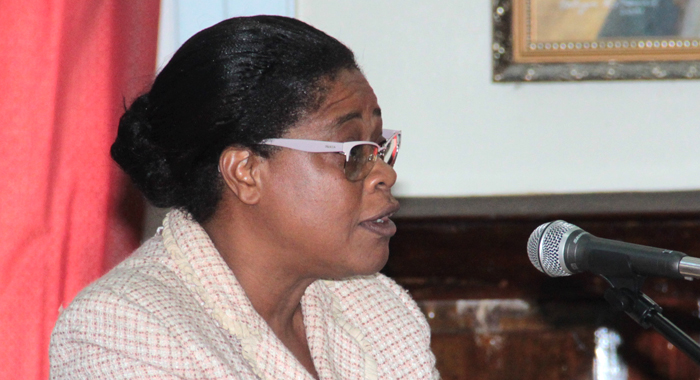 Parliamentary Secretary in the Ministry of Education, Sen. Deborah Charles is “Hitler” at home. (IWN photo)

Not many persons might be pleased to be associated with the name “Hitler”.

But Sen. Deborah Charles, who is Parliamentary Secretary in the Ministry of Education, Reconciliation and Ecclesiastical Affairs, told Parliament on Friday that “Hitler” is her name at home.

“I’m inquisitive. They call me Hitler at home. That’s fine,” she said during the debate of the Cybercrime Bill.

The name “Hitler” is almost always understood to mean Adolf Hitler, the German politician who was the leader of the Nazi Party and was responsible for the extermination of six million Jews during the Holocaust from Jan. 30, 1933 to May 8, 1945.

Charles entered politics last year after 30 years of teaching and used the name “Teacher Debbie” during the campaign for the Dec. 9 general elections.

She contested the West Kingstown seat on behalf of the ruling Unity Labour Party but was rejected by constituents in her bid to unseat the opposition New Democratic Party’s Daniel Cummings, who was re-elected for a second term in office.

Charles was appointed a senator and junior minister of education on Dec. 29, 2015.

8 replies on “At home, Sen. Deborah Charles is ‘Hitler’”