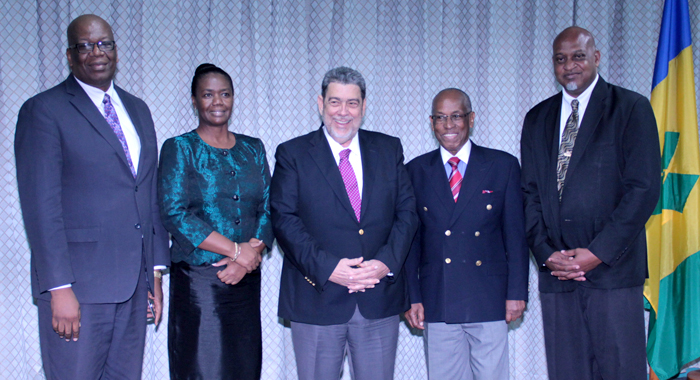 An experienced envoy is among three new diplomatic appointments that Minister of Foreign Affairs, Louis Straker announced on Monday.

Ellsworth John, who served as St. Vincent and the Grenadines’ (SVG) representative to the United States from April 2001 to September 2007, has been appointed as Kingstown’s envoy to Cuba.

John’s most recent posting was as Director of the Regional Integration and Diaspora Unit in the Office of the Prime Minister, a position he has held since October 2007.

He was at the same time SVG’s ambassador to the Caribbean Community.

John, who speaks Spanish, will replace Dexter Rose, a Cuba-trained communications professional and former newspaper editor, who held the post of ambassador to Cuba since September 2005.

Prince has been the nation’s disaster management chief for about 12 years.

As consul general, he will replace Selman Walters, a former cabinet minister who was appointed in 2011.

Straker said that the government will not appoint a deputy consul general but will, later on, appoint a trade attaché “who would work with the consul general in order to promote trade and investment in St. Vincent and the Grenadines”.

The foreign minister said that Kingstown has a vacancy at its embassy to the Organization of American States and the United States in Washington, DC.

That embassy has been run by chargé d’affaires Omari Williams for the past year or so since former ambassador, La Celia Prince left the post to take up a position at the OAS.

On Monday, Straker formally announced the appointment of Chief Education Officer Lou-Ann Gilchrist as SVG’s ambassador to the United States and the OAS, as well as non-resident high Commissioner to Canada.

“I believe that these are the changes that would be taking place immediately. I know there are some coming up a little later on,” Straker said the National Consultation with Heads of Embassies and Consulates, the first in about five years.

He said that Andreas Wickham, “who has been serving us extremely well at a critical time in Venezuela, he still has some months to go and at that time, we would make the necessary appointment”.

The nation’s diplomatic corps also includes Consul General in Toronto, Fitz Huggins, who Straker said has been working hard trying to get more Vincentians on the farmer workers programme.

“And he has been shuttling to western Canada to see whether we could not expand on the employment of skilled, semi-skilled and unskilled workers in that part of the world.

“And very soon, the Minister of Labour and the Minister of Agriculture will be visiting western Canada in order to try to secure greater employment for us in that part of Canada.”

The veteran in the Vincentian diplomatic corps is Cenio Lewis, who has been the SVG’s High Commissioner in the United Kingdom.

Straker noted that Lewis is trained in nursing and also has degrees in economics, law, and theology.

“He has done a fantastic job and he will remain there a little longer. I know he wants retirement but we ask him to stay on for a little longer and we are much appreciative of the work that he has been doing.”

I. Rhonda King will remain the nation’s ambassador to the United Nations, Straker said.

Speaking earlier during in his address at the opening ceremony of the consultation, Straker said diplomats are no longer confined to representation, negotiation, communication, and consular services “but are now engaged in reporting, trade promotion, country-branding, services promotion, public relations, and cultural exchanges…

“Today’s diplomats must be equipped to grapple with a myriad of issues which now confront global governance,” he said.

He said that for SVG to survive in the current global environment, it must utilise its diplomacy more.

Straker said that as small nation states are confronted daily as economic, social, environmental vulnerabilities that challenge their ability to respond effectively to their economic and other developmental needs, one significance plank is collaboration and block building at the local and regional levels.

He said that in the areas of trade and commerce, SVG’s exports lack critical mass to create economies of scale.

“Transport vulnerabilities, high energy cost, environmental vulnerabilities and shocks resulting from climate change and insidious actions in metropolis are daily occurrences that our government must seek to mitigate.”

He said these are facts that hinder sustainable development, adding that SVG’s key strategy must be the use of soft power diplomacy in order to meet it challenges.

“It, therefore, means that our diplomats are our eyes ears and voices in the international community. We must become relevant actors with great technical awareness. We have to get past our traditional outlook of establishing diplomatic relations and cooperation with countries and maintaining them.

“We must shape our foreign policy in a proactive way to ensure that it is effective in today’s changing world. Moreover, we must make sure that our national developmental needs are achieved through diplomacy. This task is indeed challenging,” Straker said.

One reply on “Veteran, newcomers among new St. Vincent diplomats”