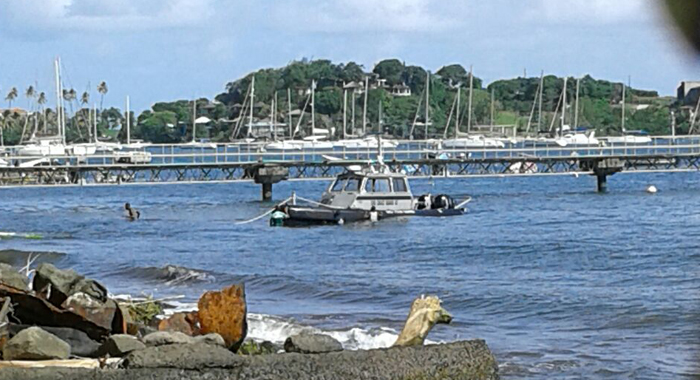 The St. Vincent and the Grenadines Coast Guard Services says it is investigating the circumstances surrounding one of its rigid-hulled inflatable boat (RHIB) patrol vessels taking on water while docked at the Calliaqua Coast Guard Base on Saturday.

iWitness News understands that a worker at a nearby business raised the alarm after seeing the boat partially submerged in water.

Reports are that Coast Guard officers then rushed onto the boat with buckets trying to bail out the water, before deciding to tow the boat ashore.

Commander of the Coast Guard, Brenton Cain told iWitness News on Tuesday that it is virtually impossible for a vessel of that type to sink.

Wikipedia says a RHIB is a lightweight but high-performance and high-capacity boat constructed with a solid, shaped hull and flexible tubes at the gunwale.

The design is stable and seaworthy and the inflatable collar allows the vessel to maintain buoyancy if a large quantity of water is shipped aboard due to bad sea conditions.

Cain told iWitness News that the boat, which was recently re-launched, took on some water and the Coast Guard is investigating the cause.

The boat is one of two donated to the SVG Coast Guard by the United States in 2012 as part of a maritime security assistance initiative that aims to deter threats associated with transnational organised crime.

The two Defender-class interceptor vessels are multi-mission capable platforms that can exceed speeds of 40 knots and are nearly identical to the boats used by the U.S. Coast Guard.

They can also conduct search and rescue missions and are capable of towing small vessels in distress and responding to environmental or natural disasters.