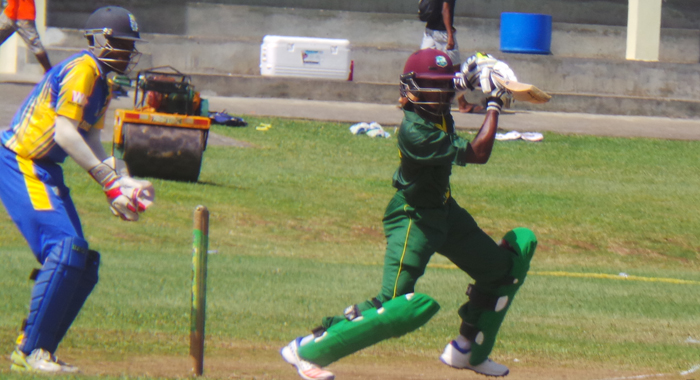 Windwards captain Emmanuel Stewart sweeps during his innings of 54.

The Windward Islands, behind a fine all-round performance by eventual man of the match, Ryan John, defeated Barbados by 3 wickets while the Leewards Islands beat Guyana by 30 and Trinidad and Tobago had a convincing 151-run win over ICC Americas, when the limited overs phase of the West Undies U19 tournament continued on Saturday.

The Windwards, who won the toss and elected to field, saw their opponents recover from the precarious position of 46/4 to be dismissed for 178 in 47.3 overs.

The Barbadians’ recovery was led by Shamar Springer (63) and Dominik Drakes (26), who added 75 for the fifth wicket. However, the Bajans suffered a slight collapse as they slipped to 134/8-losing 4 wickets including that of Springer for the addition of 13 runs. Springer, who joined the Barbados team for the limited overs version of the competition, struck 2 fours and 4 sixes in his innings.

It was then left to Joshua Bishop (35) and Tremaine Harris (11) to add 40 for the ninth wicket to help their team to a competitive total.

The Windwards, who had earned a 10-wicket victory over Jamaica on Thursday, thanks to half-centuries from openers Anil Mathew and Johann Jeremiah, lost both cheaply and looked to be in some problem at 59/4. But captain Emmanuel Stewart (54) batted intelligently in adding 46 for the fifth wicket with John. He struck 2 fours in his near two-hour innings. His dismissal being bowled by left-arm spinner Bishop with one that kept a bit low, was quickly followed by Othneil Lewis (0) to make the total 105/6 in the 32nd over.

John was joined by Johnel Eugene (25) and the pair took the total to 170 before Eugene offered a catch to extra-cover. John (49) then pulled Dominik Drakes to the square-leg boundary off the third ball of the 47th over to secure the victory. Bishop ended with 3/35, Deswin Currency 2/29 and Harris 2/35.

In another match, this time at the main Arnos Vale Playing Field, the Leeward Islands defeated Guyana by 30 runs, thanks to another good bowling performance from pacer Kian Pemberton. Man of the match Pemberton finished with 4/29 to help dismiss Guyana for 192 replying to the Leewards 222/9 in their 50 overs.

Guyana’s batting was led by Joshua Persaud and Bhaskar Yadram, who both got 44, and Raymond Perez, whose 27 in the lower order caused the Leewards some anxious moments, with Camron Pennyfeather 3/29 and Kofi James 2/24 giving Pemberton good support with the ball.

Earlier, the Leewards behind a century opening stand between Tyrone Williams 69 and Ross Powell 38 looked to be on course for a major total but a middle order collapse saw them go from 165/3 to 172/6. Williams, who was first to go with the total 104/1, struck 6 fours and 3 sixes.

With the loss of quick wickets it was left to Kofi James 32 to add useful runs late in the innings and post a total that was just out of reach for a game Guyana team.

Three-day champions Trinidad and Tobago put on a ruthless display with both bat and ball to brush aside the ICC America at the Park Hill Playing Field.

Trinidad, behind another brilliant batting performance from captain Kirtstan Kallicharan (78), reached the competition’s highest total of 279/9 in their 50 overs after being asked to bat. Kallicharan who struck 8 fours and 1 six was able to build on the opening partnership of 51 between Keagan Simmons (28) and Joshua Dasilva (24). Playing with his customary ease and confidence, he scored his runs on both sides of the wicket as he added 55 with Dejourn Charles (23) for the fourth wicket and 50 with Bryan Boodram (26) for the fifth wicket. The big-hitting Jonathan Bootan struck 4 sixes in his cameo 32 off 12 balls with 4 sixes. Spinners Aran Pathmanathan 2/39 and Rommel Shahzad 2/70 got some wickets for ICC Americas.

Faced with the daunting task of scoring at just under 6 runs an over, the ICC Americas were undone by the pace of Jalarnie Seales 4/33 and Negus Smith 3/40 and were dismissed for 128 in 32.4 overs. They were saved from total ignominy mainly through the efforts of Abrassh Khan who struck an even half century. His counter attacking innings saw him hitting 3 sixes and 3 fours off the 47 balls he faced.

The Leeward Islands gets a Bye for this round.