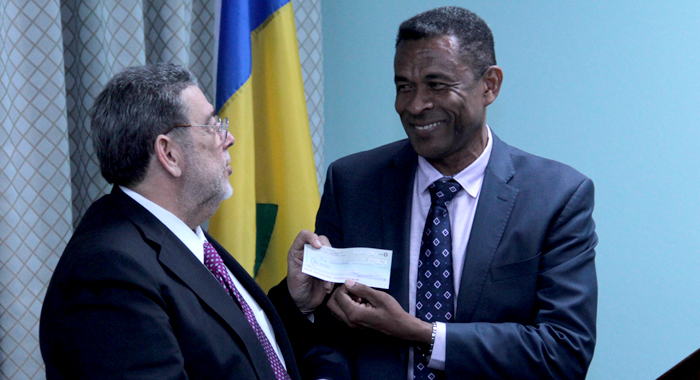 A Vincentian diplomat has donated EC$6,000 to the St. Vincent and the Grenadines Zero Hunger Trust Fund, an initiative that targets some 3,000 Vincentians who the government says are dirt poor.

Fitz Huggins, the nation’s consul general in Toronto, said he came up with the idea of donating the funds more than a year ago.

“Over a year ago, even before the Zero Hunger initiative was presented in the Budget, I called the PS in the Ministry of Health and I told him I had an initiative I wanted to work with the ministry with as a nurses’ apprenticeship programme,” Huggins said Monday at the Ministry of Foreign Affairs in Kingstown, where he presented the cheque to Prime Minister Ralph Gonsalves.

“Because we know a lot of nurses who have left school are at home and have not been placed in any clinic or hospital,” he said during the presentation, which took place during the opening ceremony for the National Consultation with Heads of Embassies and Consulates.

“And I thought that it was important that we get a couple of these nurses out and start them, give them a leg up sort of thing, get them started on their career so that they can go into clinics in rural areas and give their services and pay them a stipend,” Huggins said.

Huggins said the money was “not coming from my excesses. It is coming from what I have worked hard for and I know when my wife looks at the account she would want to know where did that $6,000 go.

“I am not going to challenge my other colleagues to match it, but I hope they do,” he said.

Gonsalves thanked Huggins for the contribution and said the Zero Hunger Trust Fund was a pledge that the government made in its manifesto for the December 2015 general elections.

He said that by 2009, his government, which came to office in 2001, had reduced from 25.7 to 2.9 per cent of segment of the population living in abject poverty.

But from then to now, the government has noticed that this 3 per cent was intractable and the global economic crisis made it very difficult.

Gonsalves said that his government formed a view that no one in SVG should go to bed hungry and that they believe that they can achieve it by 2020, 10 years ahead of the UN target.

He, however, said that the existing programme was not touching this intractable number and the government decided to collect the names of these 3,000 indigent persons and to target some especial programme to reach these people via the Zero Hunger Trust Fund.

Gonsalves has said that he will donate to the fund one month’s salary every year for the next five years.