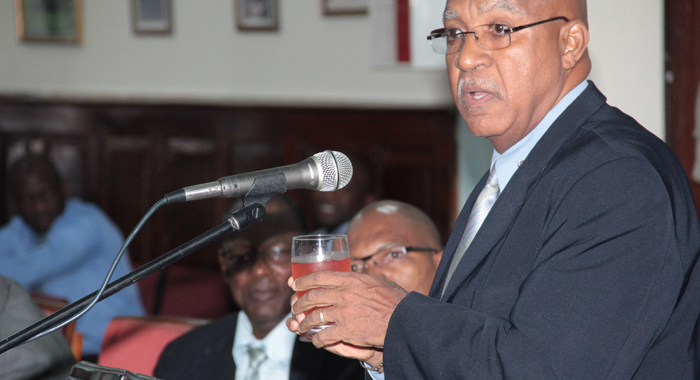 Opposition lawmaker, Sen. Julian “Jules” Ferdinand prepared a glass of juice in Parliament on Thursday to illustrate a point about the Cybercrime Bill that was passed into law one day later.

But while Ferdinand mixed the orangish drink, government senator, Julian Francis, famed for his love for another drink of a more reddish hue, did not find Ferdinand’s demonstration helpful and let Ferdinand know how unmoved he was.

The opposition voted against the bill, which Ferdinand said was a timely piece of legislation but contained some unacceptable clauses.

“There is no objection to that,” he said in his presentation, which he dubbed

“The good, the bad, the ugly, and the sweetener.”

Ferdinand said there were many aspects that classify as good. “Some parts of it are good; some parts are very good. I welcome it. We welcome it.”

Among the bad, he mentioned very vague descriptions, a lack of objectivity and the size of the penalties under the bill, which can go up to EC$500,000.

“… these penalties are far too severe for what is described as the offence, in my opinion, Honourable speaker,” Ferdinand said.

He said the “sweetener” in the bill was that it must be revised within three years after becoming law.

“It is very interesting that after the objections that had emerged, locally, regionally and internationally, this  [clause] comes into the final document, and this is why I describe it as a sweetener,” he said.

“… This government is seeking to pacify people, to make them feel that even if there are segments in this that you are not comfortable with, let it pass because, in the end, you have a chance to change it,” Ferdinand said.

He then used an illustration, taking up a glass and the canister of water from the table and began to pour the water into the glass slowly, saying, “Water is good. Water is good.

“This parliament, among other things, is intended to teach and it is a message that I bring with this to teach us,” he said as opposition MP banged their tables with their hand in approval.

“Now, it is good, there is a lot of good there, but I have a little additive that I can put. Now, you see the amount of water that is in here. A lot of good; like this bill, a lot of good in it.

“But I could put just a little bit,” Ferdinand said as he poured the powder into the glass of water.

At the same time, Prime Minister Ralph Gonsalves, said, “That is like the fork at Campden Park?”

Gonsalves was referring to when Ferdinand brought a garden fork on stage to make a point during the campaign for the December 2015 general elections.

“You are not distracting me,” Ferdinand, a university lecturer, said in response to Gonsalves, adding, “but we understand the message that a little bit of something that is wrong can change the whole thing.

“So, the little wrong that you perceive in this bill changes the whole bill; changes it,” he said to applause from his opposition colleagues.

But Francis was not moved, and commented from the government benches: “I’m not impressed!”

Ferdinand retorted: “That’s ok. I am not here to impress you.”

His response triggered another round of applause from his opposition colleagues.

“Yes, and then you can put some sugar to sweeten it, but it doesn’t change the appearance,” Ferdinand continued as he added some sugar to the mixture.

“And so I am saying to this honourable house–” Ferdinand was saying as Francis asked if that is what Parliament was reduced to.

“How you mean if this is what parliament is reduced to? Parliament is intended to teach our people and that is what is happening here, and that is what I am doing. I am debating the bill, I am showing you through this that the bill has a lot of good to it but it has some bad in it and because of that, we cannot support it. That’s what I am saying, can’t you see it that that’s what I am doing,” Ferdinand said as someone shouted “No!” across the floor.

In his contribution to the debate, Minister of Information Camillo Gonsalves said on Friday that the language that can be construed as vague was removed from the bill when it went before the select committee — which met eight times over four months to review the draft legislation.

The opposition did not participate in the select committee.

Gonsalves further said that far vaguer language is in other legislation around the world.

He said that the Jamaica act has the same “sweetener” that Ferdinand referred to.

“The sweetener, to use senator Ferdinand’s language, is added and included simply because this is a fast moving field and we want to know, in short order, whether we have gotten it right. So in three years’ time –before three years’ time, we can come back to this honourable house and say, listen, we should have included this provision, this provision is not necessary and so on and so forth.”

Shortly after its passage on Friday, four regional and international press freedom organisations issued a joint statement expressing alarm at the passage of the bill.

The number of organisations signing the statement had swollen to 22 by Monday.