Windwards stay ahead with third win in U19 cricket 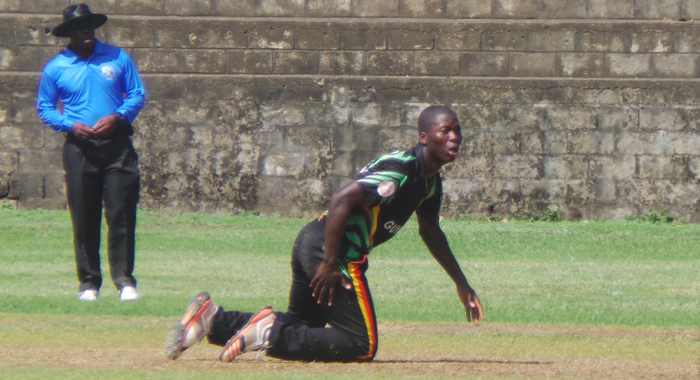 The Windward Islands, behind unbeaten half-centuries from captain Emmanuel Stewart and Alick Athanaze, rushed to a an 8-wicket victory over the ICC Americas at the Arnos Vale Playing Field on Monday in the 2016 West Indies Cricket Board Under-19 One Day Cricket tournament.

The victory, the third by the Windwards in as many matches, sees them remain as the only unbeaten team in the tournament and lining up a place in Sunday’s final.

After restricting their opponents to a manageable 165/5 in their 50 overs, the Windwards, who lost openers Anil Mathew (05) and Johann Jeremiah (26) early, were taken to victory by way of a 118 run third-wicket partnership in 18.3 overs between Stewart (*57) and Man of the match Athanaze (*57).

They came together with the total 50/2 and batted with confidence against the spin-biased ICC Americas attack with Athanaze, in particular, displaying an inclination to attack the bowlers. He took just 46 balls to make his runs which were adorned with 5 fours and 4 sixes and made in just 66 minutes. Stewart, who was the more sedate of the two, took 80 balls to score his runs and struck 7 fours and 1 six.

Earlier the ICC Americas, who won the toss and elected to bat, were indebted to Arslan Khan’s 86 to take them to their eventual total. Arriving at the wicket at 5/1, Khan, who was runout off the final ball of the innings, held things together with useful partnerships throughout his stay. He struck 8 fours in his innings which spanned 157 minutes and 133 balls. Opener Sagar Pate got 23 as left-arm spinner Rasheed Frederick returned bowling figures of 10-2-14-1.

In the match at the Stubbs Playing Field, Guyana spinners humbled Trinidad and Tobago to set up a 52-run victory and record their second win of the tournament.

Trinidad, who were set 230 for victory, were undone by the Guyana bowlers who showed good discipline for the most part and were dismissed for 177 in 44 overs, with opener Joshua Da Silva 73* being the topscore and Jarlanie, Seales batting at number 11, getting 41. The pair featured in a 78-run last wicket partnership — taking the total from 99/9. DaSilva, who carried his bat counted fours and 3 sixes in his 108-ball innings, while Seales hit 4 fours and 2 sixes. Kheshram Seyhodan took 3/32, Marlon Hubbard 3/33 and Hubbard effected two runouts.

Guyana, batting first, reached 229/6 after losing a wicket without a run on the board, with Sherfane Rutherford 93, Raymond Perez 55 and Raymond Perez 22* all contributing to the recovery.

Rutherford and Perez added 124 for the fifth wicket before Perez was well caught on the boundary edge by Dejourn Charles in the 48th over. Rutherford struck 3 fours and 4 sixes, while Perez hit the ropes 3 times and went over it twice.

Bowling for Trinidad and Tobago, Jonathan Bootan took two for 34 and Jarlanie Seales two for 37.

Barbados returned to winning ways with a six-wicket triumph over Jamaica at the Park Hill Playing.

Barbados, who won the toss and took the field, were put on the road to victory by spinners Joshua Bishop 6/36 and Deswin Currency 2 for 21 as they dismissed Jamaica for 121 in 33.4 overs with Javelle Glenn and Michael Frew both getting 26. Opener Shian Brathwaite then scored 41 to lead Barbados to 122 for 4 as Jeavor Royal finished with 2/30 for Jamaica.

Barbados has a Bye this round.