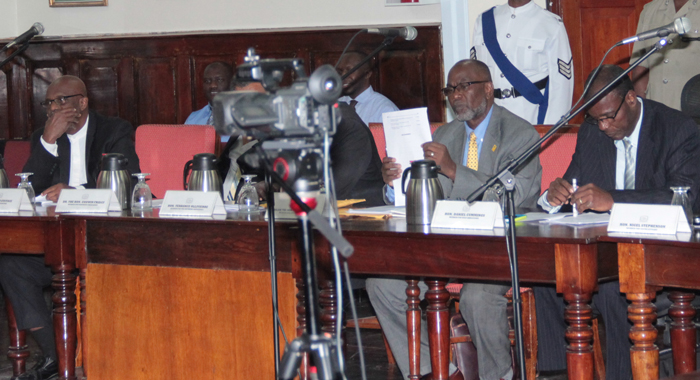 After six months of not attending meetings of Parliament as part of a political protest, the opposition lawmakers have turned up to Parliament on two successive occasions.

Does this mean that their protest has ended?

“We choose to go in at specific times and, in this case, it was because of the type of legislation that was being dealt with,” he said in reference to last week’s meeting of Parliament when the NDP attended Parliament.

During last week’s meeting, the controversial Cybercrime Bill was debated and passed into law, amidst objections by the opposition, which did not participate in the select committee at which the bill was reviewed.

Ask if it was a misstep for opposition members to have not attended Parliament on the day when the select committee was named, Eustace said:

“It was not a misstep.  We just weren’t there. It was part of our protest emanating from the results of the last general elections and it so happens that [at] that particular point we weren’t there.”

Asked how he would respond to party supporters who might criticise NDP lawmakers for not participating in the select committee, Eustace told iWitness News:

“I would say to them they are the same people who supported us in having the protest in the first place.  So, because something happens as a result of that protest which may have been expected at a particular time doesn’t mean that our protest was wrong.”

Asked if he thinks the presence of opposition legislator would have made a difference in the select committee, Eustace said: “That is the question that needs to be asked. A lot of people made proposals in the select committee and it is not normal, dealing with this particular administration, to have much change in terms of any bill that is put forward.

“And while we take a battering from some people saying, ‘They should have been there’ and so on, I want the prime minister to tell people how many times he ever went to select committee when the NDP was in office. You had select committees in those times also. I can’t recall seeing him at a select committee.”

4 replies on “Has NDP’s boycott of Parliament ended? (+Video)”