US wary of Vincy Heat in World Cup Qualifier (+Video) 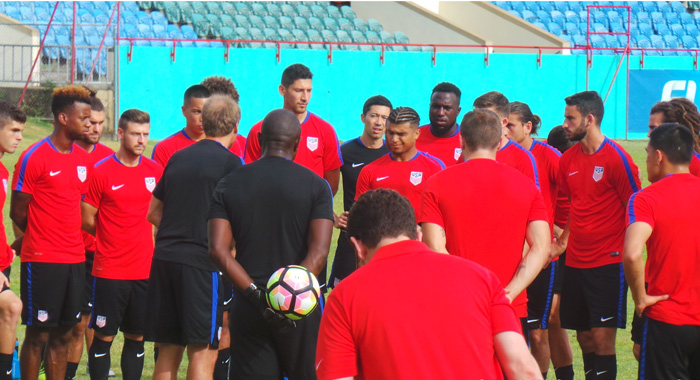 Head coach of the U.S. men’s national soccer team, Jurgen Klinsmann, had a message for his team at Thursday’s press conference at the Arnos Vale Playing Field: Don’t take St. Vincent and the Grenadines lightly.

The coach said that his team are fully aware of the Vincentians performance against Trinidad’s Soca Warriors here in March when they went down 2-3.

“They were able to take the lead and should have added another to that before Trinidad scored. But even so, it took Trinidad until the 82nd minute to score that third goal,” he said.

In addition, he reminded the Americans of their 2-0 road defeat to Guatemala that same day. He also remembers the qualifying run for the 2014 World Cup, when the U.S. barely escaped Antigua and Barbuda 2-1, thanks to Eddie Johnson’s late winner.

“That is one of the reasons why we brought the core group of Copa America, to make it easier to understand the message right away,” Klinsmann said in a roundtable with reporters.

“Things can go wrong quickly and suddenly you are in a mess.”

He added: “We took our lapses against Guatemala. We cannot afford a second one because it’s a four-team group and we need to go through.”

The United States are seen as clear favourites and the football world expects them to reproduce a result close to the 6-1 drubbing they inflicted on the Vincy Heat in their home encounter.

In that first match between the two nations, the United States got goals from Jozy Altidore, who scored twice, with Bobby Wood, Fabian Johnson, Geoff Cameron and Gyasi Zardes all helping themselves against an ill-disciplined and unfocused SVG team in the opening match of the semi-final round.

However, despite the odds being with the highly fancied U.S. team, SVG’s head coach, Cornelius Huggins believes his team has the firepower to stun his opponents.

“We accept that the world sees us as the underdogs so as far as they are concerned we’ve already lost this match. But I am confident that we have the players to push them hard and even shock them,” Huggins said at the end of Wednesday’s training session.

The team see the inclusion of Seattle Sounder 2 forward, Myron Samuel, forward Cornelius Stewart and defender Roy Richards, who all were out with injuries. Stewart, who wore the captain’s armband in the early part of the campaign, suffered a knee injury with his Finland-based club, which kept him out of action for almost a year. Samuel, who scored a double in his debut match with the Sounder 2, was stretchered off with a broken foot days later. He has since returned and scored the opening goal from the penalty spot in the 3-2 loss to Trinidad and Tobago in St. Vincent.

In addition, SVG also have the speedy and talented Oalex Anderson, also of Seattle Sounders 2. It was Anderson who shocked the United States by scoring the opener in the first encounter between the two teams.

“As we often talk over the years, the spine has to be in place, and that’s what we expect from them,” said Klinsmann. “Make sure if we lose the ball, we arrive behind the ball, avoid any kind of surprises there.”

Commentators say the United States will be far from full strength as one of their most influential players, Clint Dempsey, has been ruled out due to an irregular heartbeat, while Michael Bradley is suspended and midfielder Jermaine Jones did not recover from a knee injury he sustained in July.

In addition, defender John Brooks, who covered himself in glory at the Copa America, did not get onto the roster due to back problems.

According to the U.S. camp, the burden will now fall on players such as defender Geoff Cameron, midfielder Kyle Beckerman and captain Jozy Altidore to take care of proceedings and avoid humiliation at the hands of the Caribbean minnows.

Cameron, who was one of the players made available to the media on Thursday, said: “I still think we’re going to try and play and keep the ball on the ground, and use our strengths”.

He added: “That’s why we’re out here practicing, but maybe we’ll have to do a tactical or technical change after training. We’ll see. I think our main goal is to go out there and show the urgency from the first moment to the last.”

The Americans now sit in second place in Group C on 7 points, 3 behind Trinidad and Tobago, on 10, and 1 ahead of Guatemala, on 6.

A win against SVG today, and Trinidad and Tobago four days later would guarantee them a spot in Round 5, where the winner and runner-up of each group would advance. But the United States could even advance to the final round of qualifying with a win here and if T&T beat Guatemala.

They will oppose Guatemala next Tuesday away in their final match of the campaign.