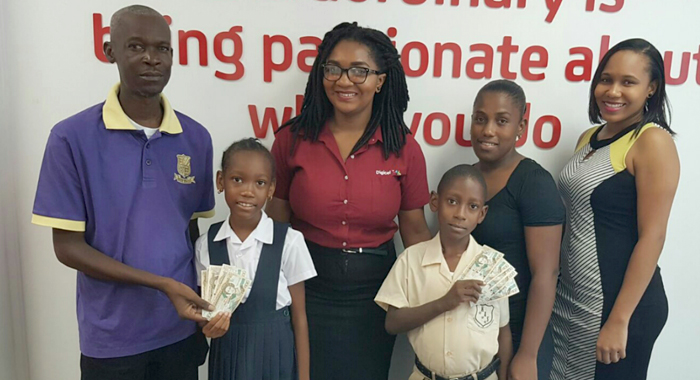 Telecommunications provider, Digicel’s Back to School scholarship campaign climaxed on Wednesday with a total of $3,000 being donated to two primary and three secondary school students in St. Vincent and the Grenadines.

The promotion, which ran for one month, ended Aug. 31 and saw persons texting to the short code 1130, telling Digicel why their child or ward should be awarded a Digicel scholarship.

The winners and their parents all thanked Digicel for the cash contribution and investing in their education, explaining that the cash will go a long way in purchasing shoes, books and other school supplies that are still outstanding, since the commencement of the new school year.

Also on Wednesday, Kamillo Edwards was presented with his cash prize, after being named winner of Digicel’s “Power my Creative Spark” photo competition, which was also part of Digicel’s Bring the Beat Summer Campaign.

The competition ran on Instagram from July 22 to August 26 and participants were required to photo match a specific theme for four consecutive weeks. The photo competition, which was judged by Digicel’s Brand Ambassador Edson “Tequila” Reece, saw Edwards taking the top prize of EC$1,000 in cash, a mentorship programme with Reece and will have a photography book published showcasing his work.

Additionally, Javid Collins, Javed David and Kyle Da Silva were all identified as runners-up in the competition receiving $100 in Digicel credit and will also participate in a mentorship programme headed by Reece.

Digicel’s Marketing Manager, Danielle Cupid, congratulated all the winners, reiterating Digicel’s commitment to invest in and elevate the nation’s youth.

Cupid urged the parents of the scholarship recipients to use the monies for the intended purpose, which is to better equip the students to excel in school. Additionally, Cupid said the Bring the Beat Summer promotion saw Digicel giving back over $80,000 in cash and prizes to Vincentians and was very well received by the public. She further explained that her team is now busy ensuring that everything is in place for a grand 2016 Christmas campaign.