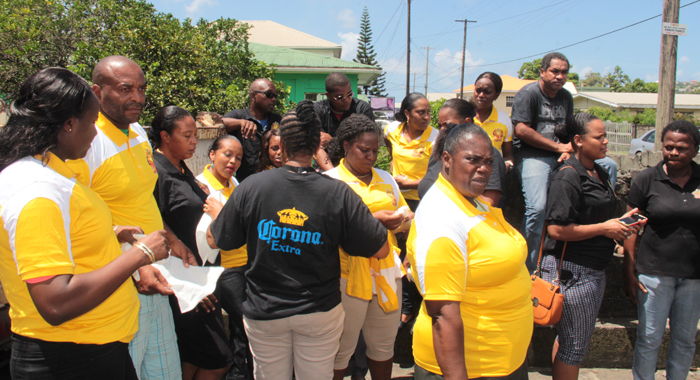 There was anger and frustration among Chill Spot workers as they watched themselves being thrown on the bread line. (IWN photo)

With the decision by planning officials to demolish parts of two restaurants in Arnos Vale on Wednesday and ensure that they remain closed, the most popular question was “What next?” as some 50 persons were put at risk of losing their jobs.

“I’m tired. I’m tired. I’ve been fighting three years back and forth. I am physically and mentally drained,” Maferne Mayers-Oliver, who, along with her husband, Garth Lance Oliver, own Chill Spot Bar and Grill on of the affected restaurants, told reporters on Wednesday.

Planning authorities were at the time demolishing structures at Chill Spot and Aqua, another restaurant nearby, which they said were erected without permission.

“The next step would probably be to do an injunction in the High Court,” Mrs. Oliver, a lawyer, told reporters, adding that she is wondering if they should even bother.

“I’m a lawyer, I know how the system operates and even if we win a couple years down the road, we are still going to be losers,” she said.

Town Planner Shelford Stowe told reporters on Wednesday that the structures were demolished because the businesses did not comply with a notice that had given them 14 days ending last Friday to cease operation and demolish the structures.

But Mrs. Oliver said that Chill Spot believes that the authorities are not following the law they say they are enforcing.

“… so even if we win, we are fighting the government and normally when you get your decision against the government, you take years if at all to get your awards or compensation. So is it really worth it?” she said.

Mrs. Oliver said that her employees want her and her husband to do whatever they have to continue the business.

“This is their bread. This is their only income. It is rough for me and Lance. The economy is really tough right now and the business helps us with some of our debts, but I guess we would be able to survive. Who knows? Maybe we can even relocate to another country or something. But, it’s the employees,” Mrs. Oliver said.

As she stood on the sidelines watching workers, guarded by police, demolish Chill Spot, one of the workers had a request of reporters.

“Ask them if they are going to find work for us because you see they close down we business, we only source of income so I want to know if we going to get a job. That is all I want to know,” one worker told reporters.

“Most of us, that is all we live by, so I want to know,” said the employee, who had been working at Chill Sport for three months.

“It’s not right at all,” another employee said.

Another added: “I feel they should have come and speak to my boss before they do anything. The decision is not right.”

But told that planning officials said they had been negotiating with Chill Spot for two years, another worker responded:

“So, what they want to say, they (Chill Spot owners) didn’t do anything for the two years?”

She was apparently referring to the steps that Chill Spot had taken to respond to the complaints of loud noise, smoke, and traffic congestion as a result of its operation.

Mrs. Oliver said the restaurant has changed its speakers and moved its music indoor, leased a parcel of land nearby for parking and, most recently, had moved its grill to the roof, after other methods to control the smoke had failed.

A worker who recently joined the establishment contemplated how she was going to provide for her child, who is in secondary school.

The Olivers also own Rent & Drive Ltd., an automotive parts business, but say that Chill Spot was the main revenue earner.

With that income stream cut off, some employees will have to be sent home, Mrs. Oliver said.

“We are going to have to take a cut. We can’t survive without it with what we are doing. We definitely would have to make some serious changes … with the staff,” Mrs. Oliver said.

“Some of the staff usually work at Chill Spot also that are in some of the other businesses, so we are going to have to cut staff, definitely.”

Mr. Oliver told iWitness News recently that there are 26 persons who work at Chill Spot, and a further 10 at a farm that supplies the restaurant.

Leo Anderson, owner of Aqua, said that 15 persons were thrown on the breadline as a result of the closure of the restaurant, but did not comment further to reporters at the scene on Wednesday.

The businesses were closed because residents of Arnos Vale have over the past two to three years been complaining about smoke from their barbeque grills, noise, and traffic congestion.

Chill Spot said it changed its speakers and moved the music indoors and leased a parcel of land nearby for parking.

In their most recent attempt to address the smoke issue, they moved their grill to the roof of the building.

Asked if moving the entire restaurant to the rooftop is an option, Mrs. Oliver noted that planning permission is also necessary for such a move.

“But that comes at a cost too,” she said, adding that a lot of people are encouraging them to relocated because they love the restaurant.

“… but it is easier said than done. Who is willing to probably lend us money at this stage to move to a new location?” she said.

2 replies on “After gov’t closes two restaurants, ‘What next?’ (+Video)”