Woman bares butt at media after son is jailed for gun 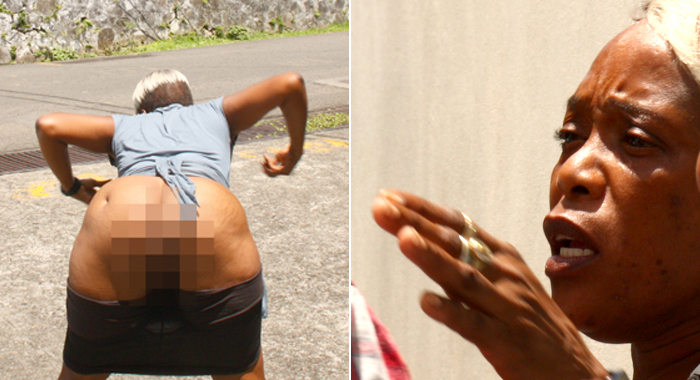 A woman exposes herself as IWN attempted to photograph her outside the Serious Offences out on Thursday.

A woman who had just moments earlier wept in court as her son was jailed for possession of an unlicensed firearm, bared her buttocks as iWitness News attempted to photograph her outside the Serious Offences Court in Kingstown on Thursday.

The woman’s son, 25-year-old Delano McDonald of Ottley Hall, was jailed for four years after being found guilty of possession of an unlicensed firearm — after a two-day trial.

Before passing sentence, Chief Magistrate, Rechanne Matthias-Browne, told McDonald that the offence for which he was charged is a strict liability one, adding that it was his responsibility to prove to the court that the gun did not belong to him.

She said that he had failed to do so, adding that the prosecution had presented a more credible case.

The magistrate noted that most importantly, McDonald had told the court that the gun was found in his bedroom.

In mitigation, the defendant said that while Ottley Hall may be known for violence, he had helped to fund a youth football team by providing uniforms for the players.

“I hope not by these means here,” the magistrate, however, commented in reference to McDonald’s criminal record, which she said she would not read out to the court but described as “not good … and isn’t going to his credit”.

At this point, the prosecutor, Adolphus Delplesche, senior prosecutor in the National Prosecution Service, rose and told the court that he was giving McDonald a break and withdrew a drug charge against him.

The Magistrate said it was commendable that the defendant was aiding the youth in the village and further told him that at his age he is not beyond redemption or rehabilitation.

She, however, noted that the offence is a serious one that carries a maximum sentence of seven years in prison, adding that she had to also bear in mind what is happening in the society regarding gun crimes.

The magistrate told the defendant that she would want to impose a sentence on him that would deter other persons from similar activities and made it clear that he would be going to jail.

She further noted that McDonald had been found guilty after a full trial and also considered his criminal record, which she said includes convictions for similar offences.

Matthias-Browne then sentenced McDonald to four years in prison.

As the sentence was handed down, McDonald’s mother, who was sitting in the back of the court commented, “Lord, Jesus Christ” and started to sob.

As the woman’s sobbing got louder, the magistrate ordered that she be escorted out of the courtroom.

But as the court bailiffs (police officers) moved towards her, the woman became aggressive and told them not to touch her.

After leaving the courtroom, the woman could be heard crying loudly in the corridor and the magistrate ordered that she be escorted from the court precincts.

The magistrate then said that she sometimes wonder about those outbursts, noting that the woman is well aware of her son’s criminal record.

She noted that the woman is a mother and would react in such a manner but further commented, “We have to train up our children in the way they should go so that when they are old they would not depart and we have these heart breaks here.

“That’s how a mother would feel, irrespective, but the writing was on — you know… I take no joy or pleasure to be dispensing these sentences at all but we have to look at the bigger picture sometimes,” she said to the convicted man.

As the trail began, McDonald’s mother had threatened journalists in the courtroom about taking her son’s photo.

After his conviction, McDonald asked police to use the bathroom.

He was placed in handcuffs and escorted to the bathroom on the ground floor of the two-storey building.

Some of the journalists covering the court proceedings used the opportunity to try to get photos of the convicted man.

His mother was not pleased and voiced her objection, then exposed herself as the lens were turned on her.

During the trial, the court heard that officers from the Criminal Investigation Department found the gun in the drawer of a dressing table inside McDonald’s bedroom when they executed a search warrant at his house on June 3, 2016.

The witnesses for the crown included the police officers who executed the warrant and the police ballistic expert.

Three of the police officers who testified — detectives Corporal Gamal Bowens, Constable Hadley Ballantyne and Constable Daniel, all of the CID and stationed at the Central Police Station in Kingstown, told the court on Thursday that they executed the warrant at McDonald’s house around 6:30 a.m. on June 3, 2016.

The search turned up the firearm — a 9mm semi-automatic pistol, serial number CAT8686.

Ballantyne told the court that when he cautioned the defendant after finding the gun, the defendant told him, “Bally, dat gun dey nah good. The gun never even fire. I can get a better one off the street.”

Ballantyne’s evidence was corroborated by his colleagues in the trial in which the defendant, who did not have a lawyer, at times seemed to have been making out the prosecution’s case.

At one point during his cross-examination of one of the police witnesses, the magistrate advised the defendant to be cautious of what he asked, adding that she was offering him the advice in the interest of fairness.

McDonald did not call any witnesses.

In his evidence in chief, McDonald told the court that he was sleeping in his brother’s room when the police arrived at the house.

He said that his brother works in the Grenadines.

The defendant told the court that the night before the police raid, he was playing a game with some of his friends in his room and he was losing continually and being knocked off so he went to sleep in his brother’s room.

During cross-examination, Delplesche asked McDonald how he knew so much about the gun, including that it was not working, if he never held it as he claimed.

He told the court that one of the police officers allowed him to hold and crank the gun at the CID department.

McDonald was unable to say how he was able to crank the gun if it was not working, as he claimed.

The police ballistic export concluded that the gun was functioning properly, but McDonald accused him of fixing the gun.