The scorching sun seemed not have had any impact on businessman Garth Lance Oliver as he sat silently on top a nearby wall as state officials demolished part of his restaurant in Arnos Vale on Wednesday.

Maybe that was his coping mechanism.

He declined reporters’ requests for a comment and his workers expressed frustration and fears about their future, having been thrown onto the bread line.

Chill Spot Bar and Grill, which is owned by Oliver and his wife, Maferne Mayers-Oliver, was one of two restaurants that had parts of their structures demolished by physical planning officials Wednesday.

The other was Aqua, which, like Chill Spot, offers grilled food as part of its menu.

State officials say that the structures on the premises where the businesses are located were erected illegally and had ordered that they be demolished and the restaurants closed.

It was Mrs. Oliver who spoke to reporters.

“I am, first of all, shocked, I am hurt, I am mad. Several different emotions,” she told reporters. 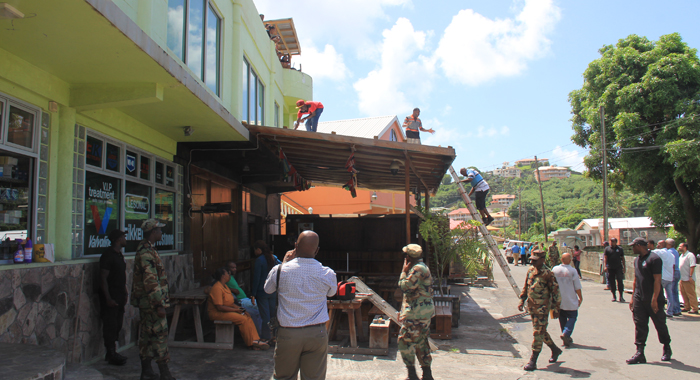 Mrs. Oliver, a lawyer, was shocked because Chill Spot had appealed the Planning notice that had given them 14 days ending last Friday to shut down the business.

Mrs. Oliver told reporters that the act said that the decision of the planning board should be suspended until a tribunal hears the appeal.

“We really thought that the process would take place and we would at least be heard before we reach to this stage,” she told reporters in the interview at Rent & Drive Ltd., an auto parts business she and her husband owns, that is located in the same building as Chill Spot.

He told reporters at the scene that the Physical Planning and Development Board had informed the owners of the properties in writing that they had 14 days to cease their operation and remove the unauthorised structures.

“The time has expired, he continued operation, so the board is enforcing the decision,” he said in reference to Chill Spot, which Mr. Oliver manages, adding that it was the same situation with Aqua. 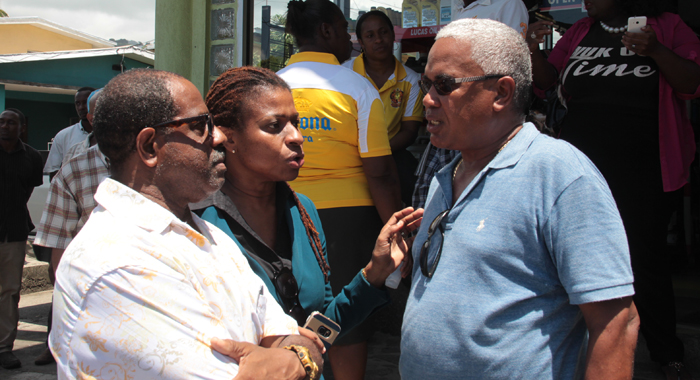 Maferne Mayers-Oliver, centre, who and her husband, Lance Oliver, own Chill Spot speaks with the Town Planner Shelford Stowe, during the demolition. (IWN photo)

Residents of Arnos Vale have complained for years about smoke, noise, and traffic congestion as a result of the businesses.

The complaints reflect a conflict between residential and commercial interests in the area that was traditionally a residential district in a country where there is no zoning.

Stowe noted the diverging interest, adding that the Planning Board has given permission for some businesses to operate in the area.

In the case of Chill Spot and Aqua, however, he said such permission was not sought.

“This was not sought, so this is why it has to come to this because it was…, in one case, nearly two years since we have been trying to work with Rent & Drive to formalise and I think just about a year with General Hardware,” he said, referring to the Aqua location, two lots south of Chill Spot.

“Both parties [showed] resistance and … continued their operation without the planning permission,” Stowe said, adding that while the board had been lenient, it had decided to take action.

“The board didn’t just wake up this morning and decided to take action. There have been negotiations, there have been discussions and the parties were given an opportunity to have a hearing to justify why they didn’t seek planning permission. And based on the justification given, they weren’t satisfactory and plausible so this is where we are presently,” the town planner told reporters.

He said that the planning board does not want to close the businesses.

“The board just want to stop the operation so that the owners can be given the opportunity to get back online formally by going through the regular procedure, making an application, a good proposal to show how they are going to operate and address the issues of concern within the community.”

He said that while he would not call it a petition, residents have written to the planning department and have also lodged verbal complaints about the smoke created by the barbecue grills.

The area is not a breezy place and the smoke can hang in the air for a while, Stowe said, adding that there have been traffic issues and environmental issues such as drainage and loud music.

“This is predominantly a residential area. It is not zoned commercial, it has always been residential, but recently, the board has given permission for other developments to take palace.”

He said that Rent & Drive, where Chill Spot is located, was approved as an auto parts business and General Hardware, where Aqua was set up, was given permission to operate a light hardware.

He, however, noted how these permissions are granted.

“The Physical Planning is not the body that makes the decision. I just want the public to know this, because, sometimes the face of the unit is seen. It is really the Physical Planning and Development Board that is mandated by the act — Number 45 of 1992 — for all developments and it has to be done in a very harmonious and progressive way. There will be conflicts but they can be negated through proper planning. So, it is not a finality to say that these businesses cannot operate, but it has to be done in a regulated way.”

Meanwhile, Mrs. Oliver told reporters that is true that they never obtained permission to operate a restaurant in the area.

She, however, said that this was not because of wanton disregard for the law, adding that the plan they had submitted to state authorities when building Rent & Drive was for commercial use.

She said the law does not say that one has to get a change of use to operate another type of business at a location.

Mrs. Oliver further noted that the law says that they have a right to appeal the decision to close the business, which they did.

“The act states once you appeal, you are supposed to go before a tribunal and even the order they served on us stated under section 5 … or paragraph 5 … that the order is to be suspended while we appeal, or until the appeal is heard at the tribunal. That was never done. It was never heard.”

She said that they had submitted plans to the authorities in 2015 regarding Chill Spot.

“Apparently, they were denied or refused in June of 2015, but we were not notified until June of 2016, when Lance went into the planning department.”

She said that in the intervening period, she had been writing and calling the planning department for guidance.

“We have all our letters. And we never got any response at all… Mr. Stowe, he appeared to be shocked when he saw that the document was never given or served to us in any way,” she said.

Most recently, the Olivers were awaiting the report of a committee that came to review the business, which was promised within six months.

“We were waiting on the report of the committee also, so this is just so shocking when in August they wrote Lance demanding that he come to a meeting.”

Mr. Oliver said that while residents of the area complained about traffic, increased traffic is a reality of development.

“Greaves and Massy caused this massive traffic every afternoon. So what do we do? Should planning close down Greaves and Massy also?” she said in reference to two supermarkets in other areas of Arnos Vale.

“I don’t even think it is that much of a traffic, but the residents probably would find it is a big inconvenience,” she said of the additional traffic resulting from Chill Spot.

She further noted that they have leased a parcel of land nearby at a high price to provide additional parking.

She further said that the restaurant used to have loud music on Fridays.

“After we realise the residents were really upset about it, we made changes. We changed the types of speakers we had; we kept them inside. We really tried our best. And with the smoke, we tried different methods, we didn’t get it right and one of the guys from public health told us to try it on the roof,” Mrs. Oliver said.