Cop freed of shooting charge after witness changes his testimony 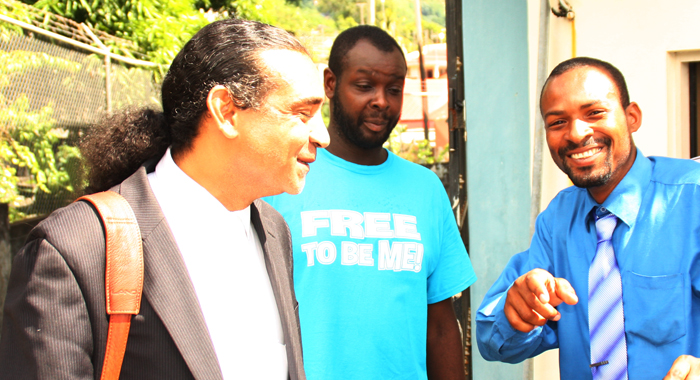 The policeman who had been charged with shooting and wounding a man in Penniston last year June walked free on Thursday and the prosecution announced that it will appeal the decision.

Police Constable Orthwel “O.B.” John, a 16-year veteran of the Royal St. Vincent and the Grenadines Police Force, walked free at the end of a multi-day trial in which a witness called by the defence said he had given a particular statement to the police because he was promised money for doing so.

John was charged last December with wounding Kevin Neil of Penniston in Penniston on June 22, 2015, by an unlawful act.

The charges came after John, who was off duty, shot Neil with his service pistol.

The prosecution said that John’s action was in retaliation, having felt humiliated because he had lost a fight with Neil some minutes earlier.

But the defence said that John had shot the man in self-defence after Neil put him in a neck hold.

John, who is attached to the Special Patrol Unit of the Police Force, was also found not guilty of a charge that he unlawfully discharged a firearm in Penniston on June 22, 2015.

Speaking with iWitness News after Chief Magistrate Rechanne Browne-Matthias gave her verdict at the Serious Offences Court in Kingstown, prosecutor Carl Williams said he would not say much about how the Crown plans to ground its appeal.

He, however, said: “I think that the evidence is overwhelming. I think that we have adduced sufficient evidence to prove the case beyond reasonable doubt.”

iWitness News pointed out, however, that the magistrate was not convinced by the prosecution’s case.

Williams said that that is why there is an appeal court, adding that he is convinced that the prosecution will be successful on appeal.

Speaking separately to iWitness News outside the court, defence counsel, Ronald “Ronnie” Marks, welcomed the decision of the magistrate to acquit his client.

“We are satisfied with the decision of the court. We said from the beginning that the evidence that they were adducing was clearly contradictory. You had four witnesses from the prosecution saying what we say is four different versions of what took place. And the evidence was in such a state of confusion that the magistrate, quite rightly, couldn’t be certain the circumstance of the guilt, and, in law, she is obliged to return a verdict of not guilty, and that is what she did.”

Asked to comment on the prosecution’s announcement that they will appeal the verdict, Marks told iWitness News:

“In my view, there was ample evidence that she could have come to the conclusion that she did. And where she has doubts in her mind, the law directs her, she has to acquit.”

John, who cried at least four times during the trial, including twice on Thursday — after he gave evidence and after the verdict — told iWitness he was “just happy; just happy” with the magistrate’s ruling.

When he took the stand on Thursday, John told the court that he and Neil were among a group of men in Penniston where there were music and drinking after the opening of the Hope-Penniston Bridge on June 22, 2015.

He said around 9 p.m. he saw Neil under a shed. He said he had seen Neil around several times but did not know him.

John told the court that while he (John) was there, the music was chipping out from time to time.

He said someone came to him and asked him to talk to Neil.

John said he identified himself as a police officer and tapped Neil on his shoulder, at which point Neil responded, “O.B. Ah long time we nah f***ing like yo’.”

John said they had a scuffle and ended up on the ground on the road, with Neil holding him in a neck lock, choking him.

The police officer, who is lleft-handed said he was lying on his left side.

He told the court that he used his left hand and reach for his service pistol, which was on his right side of his, waist and shot Neil in the leg.

However, the four witnesses who the prosecution had called earlier in the trial said that John and Neil were separated during the scuffle and John shot Neil several minutes after.

The various witnesses put the time between the scuffles and the shooting at between four to five minutes and 10 to 15 minutes.

But John’s acquittal may have been secured by his neighbour, Chris Walsh, who gave in court on Thursday a different version of the events from what the gave police two days after the shooting.

Walsh told the court that he had given his initial statement — which in many respects corroborated the accounts of the other witnesses — because Neil had said that he would have gotten $100,000 in compensation and would give him some, if he gave such a statement.

The prosecution also questioned the plausibility of such a promise, as Walsh claimed, noting that John was charged six months after the incident.

Williams asked how it was possible for Neil to make Walsh such a promise.

John was acquitted once week after the defence failed to convince the court that he had no case to answer.