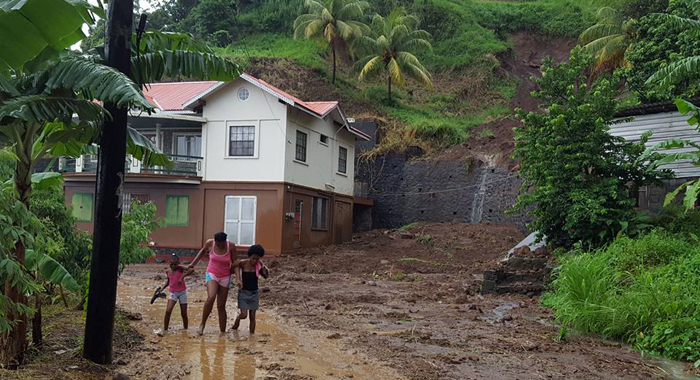 Business operations return to normal on Friday but school will not reopen until Monday, the National Emergency Management Organisation (NEMO) said Thursday after the tropical storm warning for St. Vincent and the Grenadines was discontinued and the all clear given.

Michelle Forbes, deputy director of NEMO, said Thursday evening that the tropical storm warning for SVG was discontinued at 8 a.m. and the all clear was issued three hours later.

“One person has been confirmed dead and one person, a 68-year-old man of Trigger Ridge was hospitalised and was later discharged,” Forbes said.

Kenron Samuel Elijah Antoine, 16, died Wednesday night when a large boulder pinned him against the outer wall of the house where he and his mother live in Betromy, Layou.

His mother said he had gone outside, against her advice, to make a path for rainwater that had begun to make its way into the house.

“The Ministry of Health, Wellness and the Environment has provided counselling for the family of the deceased young man in Layou,” Forbes said.

Preliminary reports indicate that one person was left homeless and 462 persons — 177 children and 285 adults — were provided with shelter during the passage of the storm.

One house was destroyed and 28 damaged, Forbes said, but noted that assessments are on-going and these numbers are expected to increase.

There were no reports of structural damage to the road network.

The Roads, Building and General Services Authority (BRAGSA) and the Ministry of Transport and Works commenced the clean-up operations and damage assessment at 2 p.m. Thursday.

During the period Sept. 28 to 29, SVG experienced severe rains and gusty winds from Tropical Storm Matthew that affected the eastern Caribbean.

The Meteorological Office reported 86 mm (3.4 inches) of rainfall was recorded at the E.T. Joshua   Airport over the 24-hour period.

Road clearance operations are continuing and BRAGSA reported that the Windward Highway is passable.

She, however, reported that the Georgetown hospital was without water due to non-functioning pump and had no power, as the generator was not functioning.

The Stubbs polyclinic reports no problems and all other district hospitals are fully functional.

The CWSA has reported that the country’s water supply was disrupted in all areas except Marriaqua, Layou, Kingstown and Barrouallie.

Some areas were still without water.

Electricity supplier, VINLEC, received minor interruptions to their system and 95 per cent of the country had electricity at the time of Forbes’ report.

The Vermont Police Station, located at Hope Flat, was closed at 9 p.m. on Wednesday as a result of the rising Vermont River, which eventually overflowed its bank downstream — at the Emerald Valley Casino.

Operations continued from the Layou Police Station and at 8 a.m. Thursday, operations at the Vermont Station resumed.

The Royal St. Vincent and the Grenadines Police Force rescued two persons who were trapped by landslide and swollen river.

“There are no immediate needs,” Forbes said.

One reply on “St. Vincent returns to normal after Matthew”