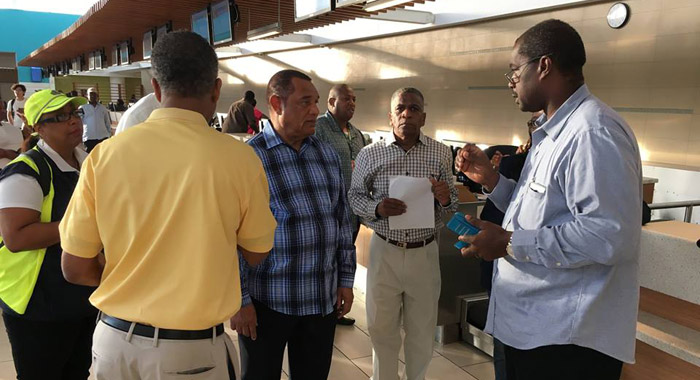 NASSAU, Bahamas (CMC) — Four days after Hurricane Matthew tore through the Bahamas, the authorities were Sunday continuing to make arrangements to provide shelters to 70 per cent of the residents of one community on the island of Andros.

Andros, was one of three islands that bore the brunt of the storm’s fury, the others being New Providence, where the capital, Nassau, is located, and Grand Bahama, home to the nation’s second town, Free Port.

Director of the National Emergency Management Agency (NEMA), Captain Stephen Russell, told the Caribbean Media Corporation (CMC) that they were trying to find reasonable rental accommodation for those affected, while encouraging those who can to seek shelter with relatives.

He said that the affected persons would also be allowed access to schools and other public buildings that are safe for housing.

“[There is] no water, no electricity. Right now, when we left at sunset, the community was in darkness,” Russell told CMC at the Lynden Pindling International Airport (LPIA) on Saturday night shortly after returning from a recognisance mission to the affected island.

“[In] Grand Bahama, the guys counted 950 utility poles down. That’s your heavy transmission lines as well as your smaller ones that feed into your households. So there is a major haste in central and western Grand Bahama to restore power and power supply there,” he said.

Russell told CMC that local teams have started the repairs and will be joined by their Caribbean Electric Utility Services Corporation (CARILEC) colleagues, once a request is made.

He said that in such a context, electricity could be restored to all affected areas across the country within two weeks.

A large section of the population of this multi-island nation has been left without electricity and water supply after the passages of Hurricane Matthew last Thursday, which left extensive flooding and damage although it did not claim any life.

Russell said that it was the first time in almost a half century that a hurricane has impacted New Providence Island.

“Seventy-five per cent of the population resides here,” Russell said, adding that after their experience with Hurricane Joaquin last year, many resident of the outer islands moved to New Providence, which, unlike last year, was not spared.

“The rest of the islands, our family of islands, they rely on Nassau to support them. Our second city, Grand Bahama, was also seriously impacted,” Russell told CMC.

“One of our other islands, Andros Island, was severely impacted as well. So we, as a country, are grappling; we are trying to come to grips with an effective plan of action to respond to the needs of the capital.

“We are also trying to take care of the needs of two of our other islands that have been impacted, but there are also other islands in between that need some levels of assistance now,” he said.

Russell said that the greatest need in Andros is housing while in eastern Grand Bahama the major concerns also include food and water.

He said food and water were being transported to the islands on Saturday, where the main access is by air during daylight hours.

“Food and water can be found in Grand Bahama. It is just a matter of moving them from the … stores to people who need them and food is being shuttled into Andros Island.”

In terms of healthcare, Russell said that hospitals “can function but there are some challenges.

“Once again, generators, light, water — we are having those things moved to those places so they can get their services back up and running as quickly as possible. So, right now, two days after the storm, there are some challenges,” he said.

Russell said that he has taken a team of about 60 government officials on a flyover of the affected areas to get a first-hand glimpse of the impact and immediate needs.

“We wanted to get them to the disaster areas to see — the health, the water, the sewerage, all those representatives went there, so now, they are formulating in their minds what they need to do to channel resources, to get their services back up and running as soon as possible.”

He said the majority of Bahamians on New Providence use the   municipal supply of water but those who have their own wells might not be able to pump water into their homes as some 30 per cent of that island was still without power late Saturday.

Commenting on the impact of Hurricane Matthew on the psychological mood of Bahamians, Russell noted that the latest cyclone comes one year after the devastating Category 4 hurricane, Joaquin.

He said the looming storm almost drove many people “insane”, but also triggered early preparation. “Many people started to evacuate from some of the islands that were impacted in the past and they all came to the capital.

“Unfortunate, the capital was impacted,” he said.

Russell noted that the Perry Christie administration has invited the Barbados-based Caribbean Disaster Emergency Management Agency (CDEMA) to help with the initial assessments.

Early Sunday, two of the teams were at the LPIA making their second attempt in as many days to fly to Andros and Grand Bahamas.

Saturday evening, the aircraft taking the teams to the islands was forced to return to Nassau midway into their flight, after the crew was informed that the flight would not have arrived in Free Port before the official sunset.

The airports on the islands are without power and civil aviation authorities are not allowing planes to arrive or depart outside of the officials hours of daylight, as given by forecasters — whether or not it is actually daytime.

Russell said that the Bahamas has received the first shipment of supplies in response to a request made even before the storm arrived.

But he also noted that Matthew has affected the country even as it was still responding to the damage causes by Joaquin.

“We were in our final stages of our repair and reconstruction programme. From that hurricane, we had to respond to 1,600 or more persons and providing building materials and have our repair teams construct their homes and we were rebuilding over 25 homes and we were trying to bring conclusion to that exercise this month. But here it is now you have to start again with a new assessment process for this hurricane,” he said.

The disaster management official, however, said that local, regional and international partners have been “most gracious” to his country.

“We got some good donations from them to push our programmes. The government has another strategy to push and set a tax in each ministry to give us some of their funds. They are looking at issuing some catastrophe bonds in the banks to generate some response for our disaster and upcoming programmes,” Russell said.

He was also confident that the resilience of the Bahamian people would shine through amidst the latest challenge.

“Like the Prime Minister said and I have seen, the Bahamian people are resilient people. NEMA — we have the support of the entire country, we have the support of our regional partners, our international partners, and we are planning to effect our relief, repair and reconstruction programme in a systematic manner and try to get it done in a timely matter and get our people back to a state of normalcy as quickly as possible,” Russell told CMC.