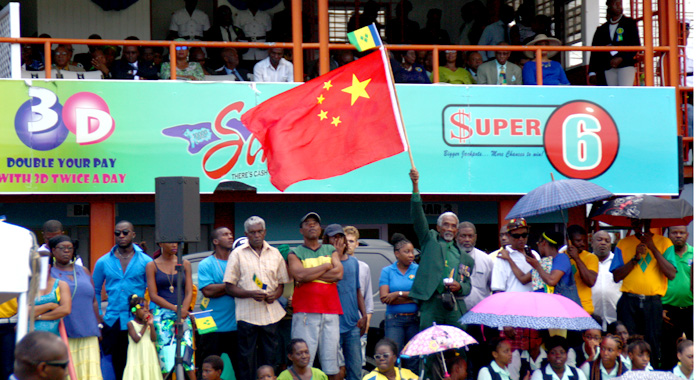 O’Neal, who has long advocated that SVG break ties with Taiwan and establish diplomatic links with China, waved a full-size People’s Republic of China flag on a pole with a small SVG flag on it at the parade.

O’Neal and the main opposition New Democratic Party (NDP), which holds seven of the 15 elected seats in Parliament, found some common ground this year, when the NDP announced that it has abandoned its pro-Taipei policy.

For a second consecutive year, members of the leadership of the NDP, including its president, Leader of the Opposition, Arnhim Eustace, attended the independence Parade — which they had not attended for years.

Also at Thursday’s event were members of the diplomatic core, including Taiwan’s ambassador to SVG, Bau-shuan Ger.

SVG and Taiwan — which China regards a renegade province to be reunited with the “mainland” by force if necessary — has maintained unbroken ties since 1981.

On his return to SVG, Gonsalves announced that Taiwan will donate EC$800,000 to the government to buy buses to transport students to and from school.

The prime minister also announced that Taiwan had agreed to give SVG a US$10 million soft loan.

O’Neal’s Green Party was founded in 2005 but is yet to make an impression in electoral politics.

The party, which is led by the former treasurer of Gonsalves’ ULP, has amassed less than 1 per cent of the vote cast in the three elections since it was founded.