St. Vincent gov’t to give US$50k to storm-ravaged Haiti 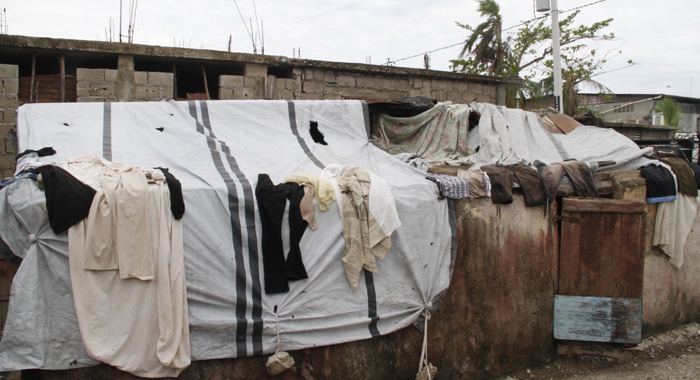 The government of St. Vincent and the Grenadines will make an initial contribution of US$50,000 to Haiti in the aftermath of the damage left by Hurricane Matthew, which swept across the country as a category 4 storm earlier this month.

Prime Minister Ralph Gonsalves made the announcement during his Independence Address in Kingstown on Thursday.

Gonsalves said that he has instructed the Director General of Finance and Planning to transfers the funds to assist the Haitian government.

“The Haitians are our Caribbean brothers and sisters who we love dearly. They are in our prayers,” he said during the Independence Parade at Victoria Park.

The announcement came one day after Secretary General of CARICOM, Irwin LaRocque, thanked the governments and people of member states and associate members, for the ready assistance rendered to Haiti and to The Bahamas in the aftermath of the disaster.

Addressing the opening ceremony of Caribbean Week of Agriculture in George Town, Grand Cayman on Wednesday, LaRocque said that stakeholders in the regional agricultural sector were meeting “in the shadow of a great tragedy that has befallen our region”.

He said Hurricane Matthew wreaked havoc, with hundreds of deaths in Haiti, and a fatality in St. Vincent and the Grenadines.

“It caused severe damage to housing and infrastructure in Haiti and The Bahamas in particular, and affected Barbados and Saint Lucia. The agriculture sector was considerably hard hit,” LaRocque said.

He said the strength of the regional integration movement “is once again demonstrated as the community rallies to assist our member states so badly distressed”.

LaRocque pointed out that the Caribbean Disaster Emergency Management Agency (CDEMA), the CARICOM institution responsible for disaster response, has “risen excellently to the challenge and continues its leadership role.

“CDEMA’s well-organised co-ordination of our relief efforts in Haiti and The Bahamas ensures that the generous assistance from our Members is promptly and efficiently delivered,” LaRocque said.

He further said that the Caribbean Agricultural Research and Development Institute (CARDI), another CARICOM agency, is preparing to provide assistance through planting material to help restore agricultural production in Haiti, The Bahamas and St. Lucia.

He told delegates that chair of CARICOM’s Alliance for Sustainable Development of Agriculture and the Rural Milieu, St. Vincent and the Grenadines’ Minister of Agriculture, Saboto Caesar, is also pursuing an initiative to co-ordinate arrangements for farmers of the region to donate food products to Haiti.

“The Caribbean Catastrophe Risk Insurance Facility (CCRIF) paid US$29 million to four affected member states. It is clear that our community institutions are working for the benefit of our members,” LaRocque said.

One reply on “St. Vincent gov’t to give US$50k to storm-ravaged Haiti ”