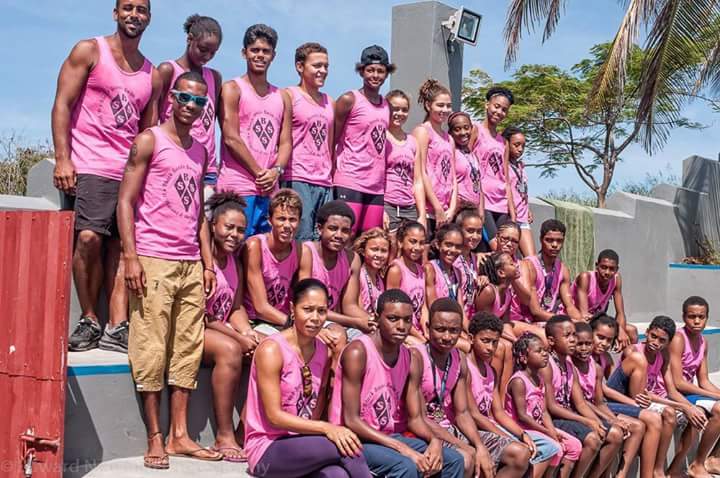 The Titans Aquatic International swim meet was held at the Barbados Aquatic Centre, Oct. 20-13, with 10 Black Sands Swim Squad swimmers competed at the event, which hosted many other highly competitive swimmers from throughout the region.

Black Sands swimmers brought back 22 medals at the end of the three-day, highly competitive event, with youngster Alex Joachim leading the way by winning 11 of the 22 medals. Joachim swam himself to top spot winning gold in the boys 11 – 12 years 100 meters backstroke in 1 minute 11.18 seconds, smashing his personal best time.

He went on to swim amazingly well in his other events by winning five silver and five bronze medals and in doing so achieved many other personal best times.

Shane Cadogan brought home six of the medals to SVG.

Cadogan won gold in the 50 metre freestyle in a time of 26.14 seconds and went on to swim himself to an additional 2 silver and 3 bronze medals.

Tia Gun-Munro and Mya Defreitas battled hard in the girls 9-10 years age group, winning 1 bronze medal in the 50 meter breaststroke and Mya winning 2 bronze medals, 1 in the 50 metre fly and 1 in the 200 metre freestyle.

Paige Cadogan, Alex Cyrus, Cruz Halnich, Kyle John and Aaron Defreitas also competed as part of the Black Sands Swim squad and were competitive in all of the events, in which they participated.

The Black Sands Swim Squad proved highly competitive swimming throughout the competition as well as conducting themselves in a professional manner.

Coach Kyle Dougan commented on how proud he was of the performance given by the squad and was pleased to see that continued training and dedication to the sport was paying dividends with so many podium finishes as well as personal bests. He also commented on the significance of Alex Joachim’s swimming times, stating that Alex’s times place him in the top 5.7 per cent of the boys in the 12-year-old age group within the whole of the United States of America.

“A great indication of the high standard of swimming coming out of St Vincent and the Grenadine,” he said.