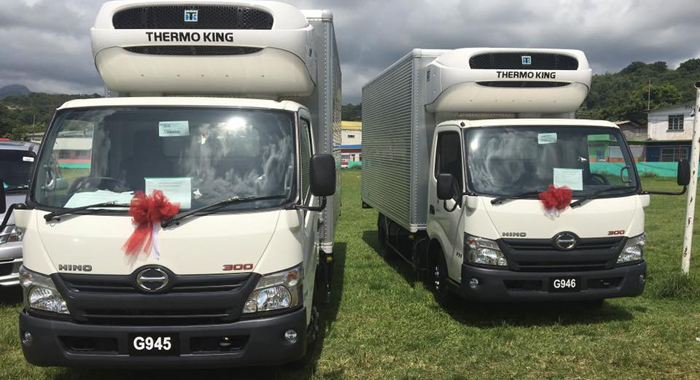 The upgrade of the facility forms part of a Japan-financed project for improvement of fishery equipment/machinery in St. Vincent and the Grenadines (SVG).

Speaking at the handing over ceremony in Calliaqua on Tuesday, Member of Parliament for East St. George — where Calliaqua is located, Camillo Gonsalves, noted that the complex was opened in 1997 and has undergone various upgrades since then.

He, however, said the most recent upgrade is significant because of the   addition of a quality chill room, the ice facility and the cold storage.

“The chill room will take your fish down to about minus 5 degrees and the cold storage will freeze your fish at below minus 20 degrees,” he said.

“This facility is upgraded today and we anticipate … even further upgrades to this facility in the near future. We are going to add solar panels; we are going to try to expand this facility, make it a little bigger to ensure that Calliaqua is a capital for fishing and fisheries in St. Vincent and the Grenadines,” Gonsalves said.

He told the ceremony that in the near future, there will be an announcement about a major private sector investment in the lobster fishing sector that will also be located in the greater Calliaqua area.

Caesar, who is also Minister of Agriculture, said SVG has about 18,000 acres of land left for agriculture, but the seascape is rich with resources.

“We have to strategically begin to harness our seascape even more, taking into consideration at all times, the important principles and precepts of conservation,” he said.

Caesar said the government is refurbishing the fisheries centres, which he said form a very important pillar in the advancement of the fisheries sector in SVG.

He said that about two years ago, the government announced a policy for the privatisation of the centres.

Halfway through the process, the government decide to advance the upgrade of the centres since the private sector investors, for the most part, local investors, where not in a position to come up with the requisite capital to do so, Caesar said.

He said the refurbished centres, to advance production and productivity, will be part of the budget debate later this year.

“I want us to respect and to value the depth of the investment that has been made. In short, we have to [take] care [of] it.”

He said the two trucks will go a very long way in the government’s general trust to have a full implementation of the Zero Hunger Initiatives.

“For many months of the year, there is an abundance of fish in some fishing communities but transportation is the problem…” Caesar said.

Speaking at the ceremony, Ambassador of Japan to SVG, Mistuhiko Okada, said that in September 2014, the two governments signed the exchange of notes for the US$4.6 million grant.

So far, the money has been for upgrading and replacement of equipment and machinery, and the improvement of accompanying facilities that were previously installed by Japanese grant aid.

In addition, the grant was used for the procurement of new equipment and machinery based on fisheries management needs.

The donated equipment was a refrigeration system provided to Bequia, Canouan and Union Island, among other locations.

“Like St. Vincent and the Grenadines, Japan also has a robust fishery sector, so the Government of Japan recognises the importance of the fisheries industry to the economy of St. Vincent and the Grenadines. I am confident that the equipment procured through this grant will help your fishermen strengthen your fishery sector, and help further develop the economy of the country,” Okada said.

The ambassador said the fishery sector cooperation between Japan and SVG is not limited to the provision of equipment.

He said Tokyo appreciates the “valuable cooperation” that Kingstown has extended to it in International Whaling Commission (IWC) matters.

“Our two countries also continue to collaborate through technical assistance programmes, under which the Government of Japan provides the people of St. Vincent and the Grenadines with training in sustainable fisheries methods and maintenance skills for equipment,” he said.

Japan has been accused of using fisheries facilities such as those it has built or upgraded in countries such as SVG to secure their support in the IWC.

Conservationists say Japan uses these tactics to secure the support it needs to continue commercial whaling under the guise of scientific research.

Okada said the cooperation between the two countries culminated in the Caribbean Fisheries Co-management Project (CARIFICO), which is based in SVG.

“Since 2013, Japanese fishing experts have been transferring fishing skills and sustainable fishery management systems to counterparts in Caribbean island nations, including St. Vincent and the Grenadines,” Mistuhiko Okada said, adding that Minoru Tamura, an expert with the Japan International Cooperation Agency (JICA), and Takamitsu Furumoto, a volunteer with the Japan Overseas Cooperation Volunteer (JOCV) prorgramme, are based in SVG and are working closely with their local counterparts in the fishery sector.

“I hope that the combination of Japanese technical assistance and grants in the fishery sector will continue to offer a multitude of benefits to Saint Vincent and the Grenadines, helping to develop this sector into one of the most robust and sustainable industries in the region,” Okada said.